Thank you Lord for Veronika West’s posting this morning in tandem with news further confirmation of the exposure of corruption, as in my hunch of May 2016 (Is The Lord Exposing Rotten Politics? UK, USA – next EU??). Interesting that this was concurrent with a Godly version of the domino effect for that month, as seen by Patsy Southway. 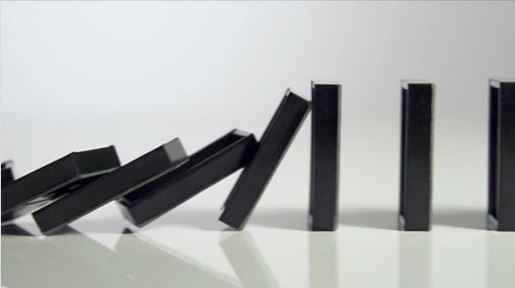 AMERICA; A LITTLE BLACK BOOK WILL BE OPENED CAUSING A DOMINO EFFECT; THE SOUND OF HIS RIGHTEOUSNESS AND JUSTICE WILL BE HEARD!

IN MY TIME WITH THE LORD THIS MORNING AS I WAS PRAYING FOR THE NATIONS, THE NATION OF AMERICA WAS BROUGHT BEFORE ME AND, AS I BEGAN TO PRAY, SUDDENLY I SAW A NUMBER OF LITTLE BLACK BOOKS STANDING ON END IN A LONG LINE LIKE DOMINOS, AND THEN I SAW THE FINGER OF GOD COME INTO THE MIDST OF THE VISION AND HIS FINGER LIGHTLY TOUCHED THE FIRST LITTLE BLACK BOOK AND I WATCHED AS A POWERFUL DOMINO EFFECT TOOK PLACE.

THEN I HEARD THESE WORDS, “WATCH! AS MY SPIRIT OF TRUTH IS NOW MOVING TO BRING EXPOSURE, EXPOSURE, EXPOSURE AS THE LITTLE BLACK BOOK IS OPENED, ALL WILL BE UNCOVERED AND REVEALED FOR THE SOUND OF THE GAVEL OF MY JUSTICE AND RIGHTEOUSNESS WILL BE HEARD GOING FORTH ACROSS THIS LAND”

With this word she republishes the following extract from A Warning to the All Nations of the Earth! as received on 8th December 2018:

‘I hear the Spirit of God say, “WATCH AND PRAY FOR THESE ARE THE DAYS OF ELIJAH, THESE ARE THE DAYS OF SUDDEN AND SEVERE SHAKINGS IN THE NATIONS OF THE EARTH, FOR A DIVINE DISMANTLING IS NOW GIVING WAY TO EVEN GREATER DESTRUCTION IN THE NATIONS, BUT FEAR NOT FOR MY RIGHTEOUS ANGER BURNS HOT AGAINST THE ENEMIES OF THE LIVING GOD, WATCH! FOR NOW I AM DOING A NEW THING IN THE MIDST OF YOU, A THING THAT SHALL ASTONISH AND ASTOUND, A THING THAT SHALL CONFUSE AND CONFOUND, A THING THAT IS STRANGE AND MYSTERIOUS, EYES HAVE NOT SEEN AND EARS HAVE NOT HEARD AND MINDS COULD NOT CONCEIVE WHAT I AM ABOUT TO DO IN THE NATIONS OF THE EARTH, NOW WATCH!

“AS THE MOLES ARE DRIVEN OUT OF THEIR HOLES AND THE BLACK SNAKES EMERGE FROM THE DARKNESS OF THEIR CAVES, LISTEN! FOR MANY WILL CRY OUT “THERE IS NOWHERE TO HIDE, THERE IS NO WAY OF ESCAPE”, BUT SURELY I TELL YOU THAT THEIR WORKS OF WICKEDNESS AND THEIR ACTS OF EVIL HAVE COME UP BEFORE ME ONCE AGAIN AS AN ABOMINATION. WATCH AND PAY ATTENTION! FOR THE GAVEL OF MY JUSTICE AND RIGHTEOUSNESS NOW FALLS UPON THE HEADS OF THE WICKED SENTENCING THEM TO AN ETERNAL SEPARATION, I TELL YOU THE TRUTH I SHALL EVEN FORGET THE DAY THAT I CREATED THEM”, says the Spirit of the Living God.

‘When I received this word today I was physically shaken to my core as the Spirit of the Fear of the Lord came upon me. I began to cry out to the Father to show Mercy for it was shown to me in but a fleeting moment what lay in store for those who have killed the unborn and those who have defied the ways of the Living God in the Nations, and then suddenly I saw into the realm of the Spirit where I saw two Archangels of the Lord, one had the appearance of a pillar of blazing Fire and the other held a sharp sickle in his hand, as I dared to look upon them I saw that they were standing between heaven and hell they were standing READY TO GO INTO THE NATIONS OF THE EARTH!’