Here are email updates received from Roger Jervois over the Holy-days. As previously they relate not only to the prophetic word Emma Stark brought on the Irish and Ulster leadership, but now also to her closing words about the manifestation of blood-thirsty violence. Roger writes, 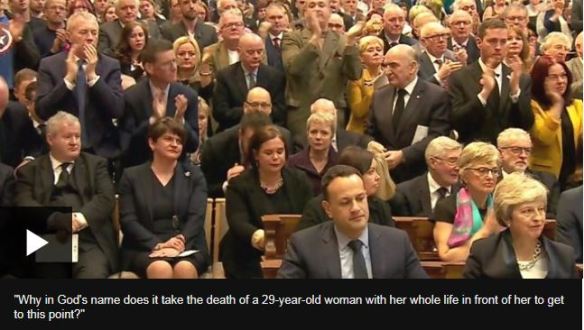 By way of interest, there might be a spiritual connection between the current problem of paramilitaries and these guys: Wikipedia ‘Fianna’. They were obliged to demonstrate their manhood by acts of extortion, etc, before they could marry and integrate into early celtic settlements. I came across some research that gave chilling accounts of their activities, surprisingly tolerated by the early celts…

At a vigil held for Lyra McKee, the murdered journalist in Derry, there is genuine tenderness between the two leaders. May Lyra’s death not be in vain.

‘Figures from across the political divide, including Sinn Féin leader Mary Lou McDonald and DUP leader Arlene Foster, were among the hundreds of people to attend the vigil.’  (BBC News NI)

Here is Mary-Lou McDonald (SF leader) quoted at a memorial service for Lyra McKee yesterday (Sinn Fein leader says dissidents must “pack up”). More confirmation of God using all things to His purposes – in this case closer UK-Irish relations.

‘She said the people of Derry and beyond had echoed this sentiment “with one voice” following Ms McKee’s “brutal killing”.

‘In the absence of the power-sharing institutions, she said a new British-Irish partnership was needed to implement agreements and safeguard rights.’

Here is something of great significance: the SDLP are republican-minded, but non-violent. They are experiencing new support in border areas such as Derry. It is a shift away from politics (defined by selfishness) to statesmanship (defined by self-sacrifice).

The full text of the letter from the SDLP Leader is below:

Leader of Sinn Fein in the North Michelle O’Neill,

‘There is an unmistakeable public desire that the tragic and terrible loss of Lyra McKee marks a turning point for our peace and political process.

‘I am therefore writing to all party leaders and to the two governments to urge that talks are convened this week in order to finally restore government in Northern Ireland.

‘On the streets of Creggan, in Derry and across Ireland a clear and resolute message has been sent to Lyra’s killers and to all of those still wedded to the futility of violence. They are the enemies of all of us on this island and enemies of the shared future we have all chosen to build.

‘There was however another equally strong message in the aftermath of last week’s murder. It was a simple and direct message to all of us tasked with political leadership – resolve your differences, end the division and get back to work.

‘As political leaders, we are responsible for the context of political division which has let all of our people down. We can’t allow it to go on.

‘I am therefore proposing that the two governments convene urgent talks this week. If this is to be a turning point, then it is vital that we listen to the public demand to return devolution and power-sharing.

‘We all know that this shouldn’t be an impossible task. We all know that reform of the petition of concern is central to unlocking the impasse and we know that what has really been missing is the political courage and will to get the deal done.

‘The excuse needs to be removed that talks in Northern Ireland can’t happen until after an election. The public expect us to go back to work and they expect us to form a government – campaigning for any election can’t get in the way of that fundamental responsibility.

‘We have to stop failing and we need to start talking.

‘I look forward to receiving your response.’

Lyra’s funeral is presently underway. A seed has died, and a tree is growing. There is such poignant humility amongst the politicians there – look at the body language.

Sometimes it is very hard to understand how things work.

Mourners have started to arrive at the funeral of Lyra McKee at St Anne’s Cathedral in Belfast.

SOUTH AFRICA – an object lesson and role model for the future?

By way of encouragement….

South Africa is well-known for lawlessness, even from long ago. Within SA, Johannesburg is regarded as the centre of gravity of lawlessness. Within Jo’burg, there is a high-rise, greatly feared suburb on the crest of a ridge overlooking the central business district, and it is called Hillbrow. This was and still is the epicenter of lawlessness of Jo’burg. When I emigrated to SA from Zimbabwe in 1983, a few months after my A-Levels in 1982, I was led to live within this environment (I grew up in a brutal civil war: 1965 until 1979; SA was easy) until 1993, when I got married. It was the easiest place to minister as a Christian, because of the harshness of the life around oneself. The outpouring of God’s grace was so accessible under these conditions. It was literally a case of “Where sin abounds, graces abounds more”. Therefore the goings-on in Derry have primed the conditions for revival, of which I am absolutely certain.

I have also seen that the bonfires that have been used by satan to provoke violence within the communities of NI will instead be fires of worship and revival, burning intensely in the spirit as praise and worship rise up to Heaven and the nostrils of our God Most High.

Take a look at this aerial photo of Belfast in bonfire season, and see what God will do with His holy fire.