Upon awaking twenty-nine years ago today (14th September 1989) I knew events in the early hours had been a landmark in my destiny. The previous evening in Pangbourne, Berkshire, I’d firmly shut the door to hearing any more about God’s Good News! But the night had been spent at 212 E_Road in Stockport, Cheshire, for a life-changing event. (Hence my laughing at the title of yesterday’s post GPS #21.2: God’s Voice Thunders. That number had also cropped up after I first blogged about this testimony!)

In a most unusual dream that night I went back in time and place. A dream so lucid that nearly 30 years later it remains vividly etched within me. Here’s what happened (dream content blue font, comments black italics).:

‘I am in my childhood home and standing in front of the very tall casement window in one corner of the lounge. I look up into the inky, dark night sky outside.
‘A small flotilla of large, wingless aircraft drifts slowly across from left to right at high altitude and I groan, “Oh…not that flying saucer nonsense. I must be dreaming!”
‘I’m sceptical about the existence of UFO’s, but now another ‘fleet’ of some sort appears from the right and heads towards the first.

(The dream now changes gear by going up a level from the usual mix of mental material to that of absolute lucidity…)
‘The ‘light goes on’! In my ‘knower’, I realise the first fleet is demonic and the second is masses of angels under the command of Jesus Christ. (I did not believe in them, and regarded Jesus as one of many world teachers. Here, I see no individuals but inwardly know the situation.)
‘I think I’m about to watch an amazing heavenly battle…but…OH NO! Somehow, I now know Jesus has espied me far down below and is coming down directly towards me!
‘All I see is a distant bright light very rapidly getting brighter and larger as it drops down to my location, just like an airliner approaching a runway to land at night.
‘Instantly, I realise my life has been one of sin that contrasts starkly against Jesus’ own holiness. Right away I realise what’s claimed about the Judgement is true – but mine is about to happen right now!
Beyond any doubt whatsoever I suddenly realise my involvement in the occult was most definitely wrong. Consequently, I deserve the undesirable abode!
‘Groaning “My number’s up!” I inwardly tremble in fearful knowledge I’m about to die at any moment. An invisible trapdoor I’m standing on will drop me straight into Hell.
‘Utmost mortal terror strikes! I dive under the drop-leaf table by the wall to the left of the window so I can hide from Jesus. But he knows I’m hiding there and swoops down straight through the wall on the other side of the corner window. He’s standing in the room and right beside the table!
‘Cowering below the table with my back turned towards him, I glance over my shoulder and see him from the knees down, his body and face out of sight above the table.
‘Most unexpectedly, somehow I have the courage to reach my hand out backwards to grab at the hem of Jesus’ robe…
‘As I tug, the event goes into yet another level of revelation regarding my childhood…Then I awake! Thoroughly alert, further sleep eludes me!’

The dream reminds me of an evocative small picture that impressed me as a child – the return of Jesus Christ: 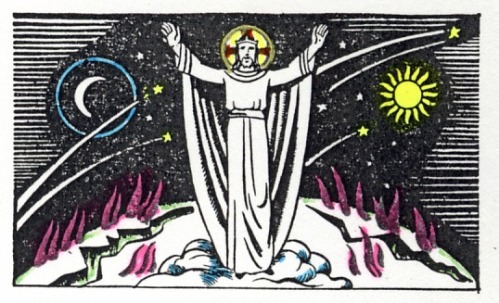 Later I understand that my terror had been ‘the fear of God’ brought through the Holy Spirit in convicting me of my personal sinfulness (ie. wrongdoing) and, thus, preparing me to receive God’s grace (ie. undeserved favour).

Also, what happened after reaching for Jesus proves He’s closely acquainted with the private details of my thoughts as a little boy. The dream’s conclusion shows He’s going to topple my childish concepts of Him and replace them with a sure knowledge of His true identity.

“The Lord is gracious and compassionate, slow to anger and rich in love” (Psalm 111). Mercifully, He plucked me from the domain of darkness to bring me into His own and receive its blessings. I deserved none of that. Truly, Amazing Grace – how awesome and wonderful..!

As a result of the most remarkable dream I’d ever had, I carefully reconsidered all my New Age and occult notions. Meditational and mystical exercises had resulted in my having some unusual, ‘psychic’ dreams, but none whatsoever like this one.

The only remotely similar dream was that of an ‘altered’ state of consciousness known as ‘nirvana’, or bliss, where I’d been taken behind its alluring golden light. Ecstasy turned to abject terror as the light I was in got swept aside like a curtain to reveal a hideous, devouring beast of utter blackness approaching me – far worse than any nightmare!

I wasn’t into drugs but was ignorant of the scripture ‘satan himself transforms himself into an angel of light‘ (2 Cor 11:14). Upon reading that verse a few years later I realised its truth had been dramatically demonstrated in reverse to me as a non-Christian!

But in this new dream terrifying fear had been overcome by Jesus Christ Himself and His wonderful mercy and love. He graciously rescued me from falling into the pit of Hell.

In this stunning night the Truth I’d been searching for turned up in Person – thank You Lord. And lots more Truth was yet to come as I opened the door to His Good News!

Moreover, in due course the amazing Encounter became triply validated…

So, if you don’t yet know Him and have that personal relationship you may wish to know more and consider this vital matter by visiting this blog’s hub Do You Know Jesus?