Simon posted this last Thursday on Prophetic Voice Leicester Facebook page (typeface colours by RB). It is especially pertinent in view of my ‘coincidental’ debate objecting to an article demeaning Holy Spirit’s bringing our Father’s love into the world via Toronto since 1994 (as here): 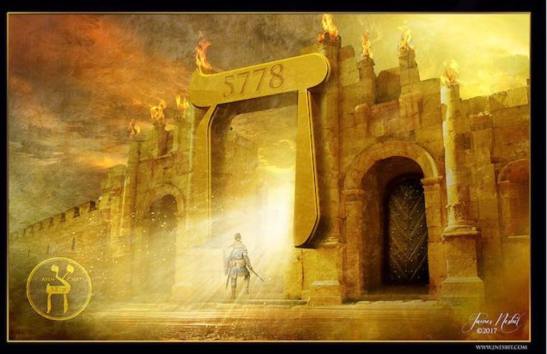 THE REVELATION OF THE CHRIST AND HIS KINGDOM

The Lord took me into a vision/dream.

I was stood in front of a giant door; the door was so large that I could not see to the top of it.

As I watched, I saw people walking up to this door. It was at this point that I saw that this one door was actually made up of many small doors within the one big one.

As a person walked up, suddenly many of these small doors would open as they approached. As they did, blinding light of many different colours shone through the door.

I saw that as each person approached, they were greeted by a person the like of which I’ve never seen, and it would be very hard to explain.

Sometimes one face would become clearer than the others, yet the other faces could still be seen in the midst of the wind, the fire and the water.

I understood that this person was the Holy Spirit; as each person came to the door, He would greet them and invite them to enter into a new door.

I heard Him say,

“The greatest doors are the ones you have to bow lowest to get through.”

The man greeted the Holy Spirit and clearly they were close friends as they embraced one another like brothers; as they did the man was lost in the flames, wind and water.

They spoke for a short time then the man looked at the door, smiled then bowed to the ground and began to crawl towards a very small very low door. As he got close, he reached out to open the door; the moment his hand touched the handle he was lifted up off the ground at an awesome speed and a door that was very high up opened to him. Blinding light poured out the door as it opened as he entered in.

It was at this point that I noticed there were other people in front of the door. Most of them ignored the Holy Spirit; others actually argued with Him when He directed them to a door to enter through.

Still others were trying to climb up to the high doors but they would keep falling; each time they fell they became more and more bitter.

I then saw another group; they were shouting, ”You must only come through this door,” and not only did they try to force people through it, but they also tried to stop people going through the other doors the Holy Spirit was directing them to.

I then saw another group of people to the side of the door; they were all together rolling around in the mud in a pigpen. They were blind to their door for the mud covered their eyes; I could see many had been in the mud so long that they had begun to rot in the midst of it.

Upon the door I saw the words –

THE REVELATION OF THE CHRIST AND HIS KINGDOM

Let those who have an ear hear!

Simon is founder of School of the Spirit, Leicester, and is in senior leadership of Holy Trinity Church, Leicester. He operates in the office of a Prophet and has been actively involved in equipping and raising up prophetic ministers both in the UK and overseas for over 20 years. . [http://www.schoolofthespirit.uk/]

4 thoughts on “Simon Braker: awesome vision of entrants to the Kingdom and of players in pigpen!”