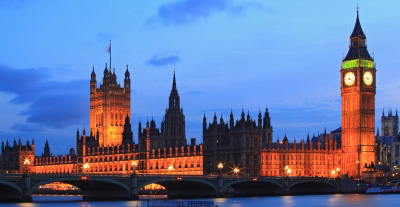 Awake in the early hours a number of notions popped into mind, maybe as pieces of the Lord’s invisible jigsaw??  ‘Twas time to pray along the lines of Romans 16 to ‘crush satan’ again and I recalled what two sisters in the Lord had told me at Acorn and now realise the scriptural aspect of one is to be announced herein as a Habakkuk declaration:

“Look at the nations and watch – and be utterly amazed for I am going to do something in your days that you would not believe even if you were told (1:5 NIV)…

The first (‘V#1’) reacted to Nina’s vision of heaven’s response to Romans 16 prayer by saying the triple lights spoke to her of one of the three lots of stakes in each of the four nations of Britain that had been seen by a visiting intercessor. Named ‘Confession & Repentance’ ‘Vision & Promises of Commitment’ and ‘Faithfulness & Covenant Unity’ they had chains connecting and supporting them so the nations wouldn’t be torn apart as our lands rocked and groaned for a while.

A couple of months ago the other (‘V#2’) had shared a vision she’d just had of tanks appearing from the south east of England. In response to the recent alert for the south coast, she writes, “…they increased in number according to the shape of the land…It was to do with the tank tracks, the things that dig into the ground so that they can manouevre over any terrain without too much difficulty. It started with something being sharpened on a moving lathe belt which after a while the lathe belt turned into the moving tank track which then multiplied into many tanks. It was the parts that made up the track that were being sharpened so that no obstacle would hinder it’s progress.”

I recalled it well for I was reminded of scripture’s awesome holy threshing-sledge in Isaiah 41, where the Lord comforts His servant Israel – so declare its meaning for today:

“See, I will make you into a threshing-sledge, new and sharp, with many new teeth. You will thresh the mountains and crush them and reduce the hills to chaff. You will winnow them, the wind will pick them up and a gale will blow them away. But you will rejoice in the LORD and glory in the Holy One of Israel.” (vv 11-16 NIV).

Wind and a gale! Didn’t they cause nationwide chaos only a few days ago?

Now in conversation with ‘V#2’, she recalls the tanks started moving off from Dover over discoloured land. However, wherever their tracks went the land became green and fresh again!! (This reminded me what happened in the picture I had whilst praying at Winchester just before the EU-Referendum vote.)

MOREOVER – DOVER was covered in our Keep Praying & Bless routine at 8am, viz:

‘We decree that Jesus is the Almighty, the Alpha and the Omega, the beginning and the end.

‘We bless the people of the British Isles with knowing the security that God truly is the beginning and the end, and that He holds everything together because Jesus is the same, yesterday, today and forever.’

SO, let’s be full of expectation for the Lord’s indicating something’s about to happen.

It is to be especially noted that Theresa May has written to the Jewish community in the UK promising to be “You community’s champion!” (as here). If she is elected as Prime Minister Great Britain may, therefore, expect to receive the Lord’s blessing promised in Genesis 12:3; “I will bless those who bless you, and whoever curses you I will curse”.

Election of the Labour party leader Corbyn would be a catastrophe for Britain because not only does he countenance anti-Semitism within the party but also as a life-long supporter of terrorist groups, he represents a clear and present danger to our national security. To those young idealists, like I was before having my eyes opened to the deep misery of 5 Labour PMs in 50 years, I would urge you to be well aware of that history as you vote. (See former head of MI6 Richard Dearlove’s page 1 Telegraph article ‘Jeremy Corbyn is a danger to this nation and exclusive report on 20-year Special Branch monitoring in view of fear he’s ‘undermining democracy’ – premium content). For lots more see Jonathan Ely’s splendid coverage of news at Why Leave The EU?

My cyber-friend Tony Puccio noted on 11 March in his blog My Dreams and Visions on Big Ben: Another Dream:

In August of 2016 I had the following vision – of Big Ben being struck at its base by what looked to be a missile.  Then I saw it fall just like the twin towers did in the 9-11 attack where the towers, instead of falling over, crumbled to the ground. Big Ben’s clock face was now on the ground but was undamaged

‘The morning of 03/11/2017 I had another dream about Big Ben only this time I saw it arise from the clock face on the ground to its original height, perhaps even taller. I remember hearing it bonging, however, it did not cease as one would have expected when it had chimed the hour of the day but was a continual bonging.  Then I saw people in beds asleep and I perceived that the bonging was to awaken from slumber those who were sleeping.

‘It’s my personal belief that England is going to play a significant role in the coming awakening hence the dreams about Big Ben.’

It just so happens that at about 6am. I heard a massive, quick ‘boom’ in my head and wondered if it could be a symbolic starting pistol to the election. A few hours later at the polling station I learned that was the time they arrived to set up for opening at 7am!

Tony’s dream of a missile attack last year was fulfilled metaphorically by the manner in which citizens were massacred on Westminster Bridge later in March. His second dream may speak of the nation waking up at long last to the treachery buried within the muslim community and our arising to new heights of our re-found national identity?

(You may like to read also: Dreams & Visions of Big Ben at Prophetical Midnight Hour.)

So tomorrow morning will start an exceptionally interesting period in British history. Bring it on Lord!