In reviewing NY Times’ article Joel urges believers not to be discouraged but to note what’s happening is as prophesied in scripture. Therefore, we are not at the ‘end of Christianity’ in its heartland. Read also A devilish plot to avoid the ‘Lake of Fire’ and mini-series Global satanic strategy on this blog. 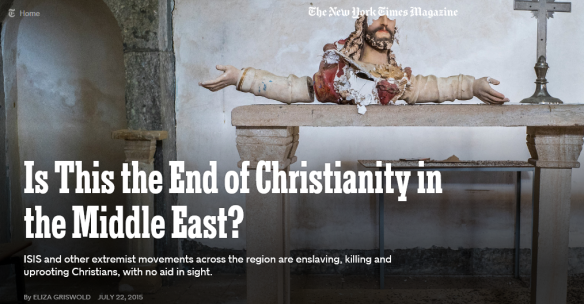 (Denver, Colorado) — In my recent novel, The Third Target, a New York Times reporter  criss-crosses the Middle East, trying to understand and explain to the world the rise of the Islamic State and the objectives of its leaders. Among the questions my fictional character — J.B. Collins — is trying to answer:

What he discovers is evil beyond his worst nightmares — a Satanic movement determined to rob, kill and destroy everyone in its path, and particularly Christians.

Now, in real life, a must-read feature story has been published in the New…

1 thought on “With ISIS on the rampage, “is this the end of Christianity in the Middle East?””