“By the mouth of two or three witnesses the matter shall be established”.  (Deut 19:15 NKJV)

This must rank as one of the most amazing examples of ‘God-incidence’ I’ve ever come across. And it’s Invisible Jigsaw and Bridge over the ‘Pond’ tags all rolled into one! (Not to mention anything to do with ‘Time’, as blogged a year ago.)

Just in case readers didn’t notice a brief but significant contribution to the last post, On unsealing Daniel’s prophetic visions, I’m repeating it below. Also, a huge “Thank you” to all who liked that post.

My post was published on Saturday morning and Tony Puccio commented later in the day as follows:

“It’s amazing you post this Richard. Look at the vision the Lord showed me.”

Tony didn’t provide a link, maybe assuming I’d have seen it as a subscriber to his blog. But I hadn’t seen it. Here’s what he referred to:

“I had a vision that has stayed with me for the past 2 days.

“But you, go your way till the end; for you shall rest, and will arise to your inheritance at the end of the days.”  (Daniel 12:13 NKJVS) 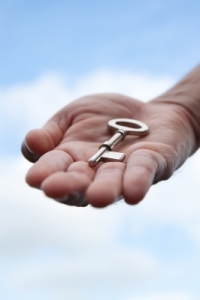 “The vision I saw comes at the end of Daniel’s vision. Daniel was told to go because the vision concerned the end. What I saw is where Daniel’s vision took place but I saw a man with a key ring on his hip and I saw books being handed out to people, I believe I was one of the people, with a key-hole on the front cover of the book. No-one could open the book given to them unless the man holding the keys gave them the key to open the book given to them. Daniel was not given the ‘key’ to understand the meaning of what was being shown to him in his vision. In mine there were people, not many, that were given books to be opened and read when the ‘key’ was handed to them.”

I asked my Arizona friend if he could elaborate on how this came to him. He replied:

“As far as the vision goes, there was nothing special that I was doing when it started… What I saw was, or so it seemed, was the place where Daniel was told to go his way. There I saw a man with keys handing out books with key holes on the front cover.  What I gather is that as we were lined up the man with the keys would unlock the revelation of Daniel’s vision a little at a time. It would seem that the people with the books were heralds.” (Emphasis added)

Now what Tony didn’t know is related to the 2 days the vision had “stayed with” him. On the 3rd day he blogged about it, which was the same day my post on unsealing Daniel got published. Neither of us knew what the other was blogging. I didn’t get any email notification that Tony had posted the above vision in what was mid-afternoon here. As I don’t work online Fridays to Sundays, except for running off Bill Koenig’s weekly reports and watching CHP’s services, I remained in ignorance of his vision.

MOREOVER, this astounding fact validates our unwitting joint involvement – my post had been written on Thursday and I scheduled it for automatic publication two days later!  That is, I was writing it on the day Tony first received the vision!

Had it not been for alterations in my regular blogging-slots as a result of unexpected  personal events, then I’d have had a full day blogging as usual. As it was only for a couple or so hours on Thursday afternoon I did a few posts but didn’t want to overload readers’ in-trays by publishing them all. I scheduled two items for publication on Friday and Saturday.

AND I was, in fact, going to have copied another word submitted to me but decided the Daniel material needed a follow-up, even though I’d also intended re-blogging another of Mark Davidson’s posts. So what I did draft was not even top of the list! I got ‘nudged’, however, to prepare some original material by Nelson Walters first!

Also, Tony has since attested in the Comments to Daniel’s Keys that he didn’t read my post until after having posted his! So he’s just as amazed as me.

What more can one say about the timing of this? Surely it must be the Lord’s doing…

Do these ‘God-incidents’ indicate that the sealed visions Daniel recorded are now being opened up and revelation gained into their prophetic meaning? I think so.

It means we are in “the time of the end”, as stated at the close of Daniel’s book…

1 thought on “Incredible timing of ‘unsealing’ and ‘keys’ re. Daniel’s visions”