This is coming to you from a man who has just passed through the valley of the shadow of death. Since my close call with eternity just a short while ago … everything has become clearer. I can hear His whisper. Unabated obedience has become my mandate. That is why I’m writing this word from the Lord..:

THE SPIRITUAL AVALANCHE THAT COULD KILL MILLIONS 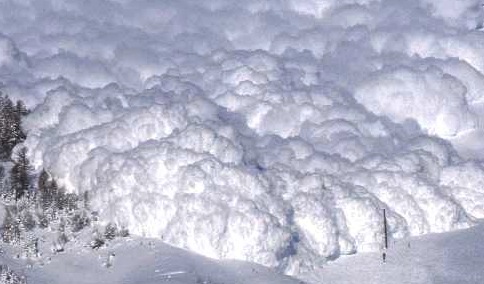 A few days ago, after enjoying quality time with Jesus, I was surprised by an alarming vision. I saw a massive, majestic mountain covered in glistening snow. It reminded me of the Matterhorn in the Swiss Alps. Its peaks were sparkling white and I was amazed by God’s attention to detail. It was so realistic I wanted to go skiing! But I sensed that there was more that the Holy Spirit was about to reveal. As I closed my eyes, I was in a winter wonderland bustling with thousands of vacationers. The ski lodge, condos, hotels and cabins were at full capacity at this popular resort.

Day quickly turned to night as the skiers, snowboarders and sports enthusiasts were settling in. Anticipation grew as the snow began to fall. Everyone headed to bed believing tomorrow would be a day of sheer enjoyment on freshly covered slopes. For an avid skier, the exhilaration of being the first one to race down a new blanket of snow is a dream come true.

Throughout the night, winter storms dropped several feet of new snow on the slopes. The night ski patrol was put on full alert. Their mission was clear. With the potential of killer avalanches they took to their posts.

I began to weep as the vision continued to unfold along with its spiritual application.

The ski patrol operated like a well-trained platoon. Some boarded helicopters manned with small bombs, others jumped on snowmobiles loaded with hand-held explosive devices. What seemed to be a strategic group of sharpshooters were stationed at the base maneuvering anti-tank weapons aimed at the snow-covered peaks. They fired their weapons at strategic points in the “avalanche zone” to force avalanches before the snow accumulated to a life-threatening depth. Left unchecked, the accumulation of heavy, dense snow packed on top of lighter snow could easily slide down with incredible speed and force, resulting in enormous damage and loss of life.

The Lord began to speak. I trembled. The fresh, new snow represented the false teaching that is steadily falling on the ears of the body of Christ. It has been, and is, a heavy snowfall. The skiers represented believers and non-believers, trusting the resort for a safe and memorable experience. As Christians, we have been warned to be sober and vigilant (1 Peter 5:8). However, the present, awe-inspiring teachings have lulled many into a deeper sleep.

The layers upon layers of snow have been steadily covering the solid traditional truth of Christ. The truth is that foolish teaching in these days will become so fashionable even the most dedicated believer could become deceived (Matt. 24:24). It’s happening before our eyes. One (of our) spiritual leaders said the other day: “You guys are old-fashioned ‘holiness,’ we are modern-day ‘grace.’ You live in bondage while we can do anything we want.

Pastors and teachers worldwide have succumbed to heretical teachings including universal reconciliation, deification of man, challenging the validity of the Word of God including His judgements, and even lifting any boundaries, claiming His amazing grace is actually “amazing freedom.” You are free to live according to your own desires. Sound familiar? “They had no king and did what was right in their own eyes” (Judges 17:6). These popular self-proclaimed ministers of the gospel are covering the “slopes” and will be held accountable for the spiritual death of millions.

Just as the ski patrol did in this vision, those who are aware of what’s happening must take swift and accurate action. Their weapons of warfare must be aimed at the peaks and the ‘avalanche terrain’ to dispel the lies. Apostles, prophets, evangelists, pastors and teachers must be willing to drop spiritual bombs, fire anti-heresy missiles, and even drive into the danger zones armed with explosive truth to confront this potential avalanche. The generals of this generation must leave the war room and put their years of experience on the front lines.

Friend, I humbly encourage you to heed this vision and take it before the Lord. I’ve written it just as it was given. My responsibility is to share with the body of Christ His words to me. The ears that hear and the hands that obey are out of my control. This is not just Steve Hill telling a story. Most of what the Lord shares with me is personal and remains in my heart. But I sincerely believe that this is a warning for this hour.

Satan is “snowing the saints” but it can be stopped. In the vision I heard explosions. I saw dedicated Christian soldiers scrambling to do anything it took to bring down this avalanche before devastation occurred. One of the most powerful weapons we possess to combat this onslaught is the tongue. Let God set yours ablaze by preaching ALL the words in RED. If we take action now the result will be a tearing down of false teaching and a remaining layer of solid, God-given, Biblical instruction that will save the lost, heal the sick and strengthen Christians to do the true work of the ministry.

Underlining and emboldened text are added. My post of 12th December, Does David Cameron’s decision line up with the Bible?, closes with reference to Steve’s article.  His stirring message at The Revival Reunion was about the implications of living in or near Sodom in Lot’s day, as it applies today. In passing, Steve mentioned a vow he’d made to the Lord as he was about to die. He vowed that, should he be restored back to life, he’d continue evangelising for the sake of millions of Muslim souls!

In the circumstances, therefore, it behoves every reader to take the preceding message extremely seriously, as though issued with the holy ‘imprimatur’ of Jesus Christ Himself.