Almost all my readers and Farcebuk friends know my very tight online schedule means I don’t normally get time for videos on prophecy and definitely NOT for politicians, even Donald Trump!  The exceptional very few must be short and able to be run at speed. If ever there’s anything important – like the previous post’s associated papers – then I can scan-read at speed to save time!

SO, I never got to watch anything of Donald Trump making his announcement at Mar-a-Lago on 15th November, but one of my stalwart readers kindly permits me to quote his email :

Firstly, regarding your blog, in my opinion, you have no need to make any apology regarding DJT,  but I do understand your having to “cover all bases”.

I am just writing to say that I am amazed at the copy and paste of the headlines that say DJT is running in the 2024 elections. Not only do the MSM parrot this but my concern is it’s repetition in Christian circles as well.  Having listened to his whole speech once, I thought to myself, that is not right, so I went and had a second listen and found at (about) the following time stamp of 27.29 mins. I heard the following ;

“In order to make America great and glorious again, I am tonight announcing my candidacy for president of the United States”

I am Spirit-led to believe a very clever play on the word candidacy:

If he had said that (he was running a third time), he would have conceded the 2020 elections and ratified the fraud. That would not make sense now would it? (And can I sense a shudder down your spine considering your Spirit-led work regarding this!! J)

I am not a fan of Simon Parkes’ Connecting Consciousness (CC – which to be honest I think is just repackaged New Age) However he does appear to have intel (did I say that once before?) and is good at reading in between the lines. He however also misquotes Trump by using the word “running” – DJT did not say that!

My tuppence worth. Much Regards

E’s “tuppence worth” is certainly worth much more because it’s an excellent insight and we later both agree DJT is a master strategist, as may be noted from the article cited in my previous post. But let’s take a closer look at the documentation and this very clear descriptive caption:

Now around midnight and into the early hours my friend Chris Moyler watched DJT’s announcement and reports as follows on his Telegram channel on 16th November:

President Trump announced that he is running for the 2024 Presidency. He made it very clear that we still face a torrent of opposition from vested interests, and a dangerous journey but said WE WILL WIN!

“We will be resisted by the combined forces of-

-the Establishment
-the Media
-the Special Interests
-the Globalists
-the Marxist Radicals
-the Woke Corporations
-the Weaponised Power of Federal Government
-Colossal Political Machines
-A Tidal Wave of Dark Money and
-The Most Dangerous Domestic Censorship System ever created by man.”

“We will be attacked, slandered and persecuted-just as I have been.
But we will NOT be intimidated!”

“We will march forward into the Torrent.
WE WILL WIN!!”

He came across as very sober, very focussed- no joking at all- like a commander speaking to the troops before a great battle.

His face was filled with steely determination!

I believe that people will now divide over this man, as never before. The vested intests will NOT let go without a substantial fight.

The next day Chris posts:

A truly helpful and insightful message which explains what was really going on when President Trump announced his candidacy for the Presidency.

A wealth of vital info here!

***
09:35. In 1871, the US changed from a Constitutional Republic to a CORPORATION, with its own Constitution!
10:20 Pres Trump is 1st individual in 150 years to stand a President of REPUBLIC of US
10:40. 19 FLAGS behind him.
18 lawful Presidents before THE SUBVERSION of 1871, when international bankers forced outsource of US Treasury to a third party. This lead to 1913 Federal Reserve- a PRIVATE bank!!
12:25. No Presidential Seal because there is NO LONGER any US Corporation
12:40. This announcement was a MISDIRECTION – we are in a conflict that we cannot lose.
14:50. On his application form, DT signs as PRESIDENT of US!

21:15. Why are border states important? Gregg Abbot declares invasion, and so would Kari Lake in Arizona.
This would REQUIRE, BY LAW, the intervention of US Military.
23:30. Why is National Guard being used around the world?
25:05. Why more than 14 separate national militaries in skies over the US? This is NOT on the news!
26:55. The Govt of US is under temporary military control, and a complex coordinated military operation is in place to bring down, purge and replace the existing Government!
26:55. US National Guard is NEVER used internationally, unless it is under Federal Control. This ONLY can happen in a National Emergency.
27:25. For FIRST TIME in history, President Trump activated the NG under FEDERAL control, placing them under the Pentagon, in order to bring to an end the NATIONAL EMERGENCY 30:40
31:20. Q correlations beyond coincidence. Pres Trump retouched that Tik Tok, FB and Twitter (until recently) are CHINA assets
33:30. Q drop 55
24:10. We have just crossed over into REFORMATION and REINTRODUCTION of Constitutional Republic.
35:05. Articles of Federation adopted by first Continental Congress. 01Mar1781 to 1789
-League of Friendship of 13 States
37:15. After Revolutionary War, 2 MASONS, James Madison and George Washington feared collapse. Much paper money printed!
38:40. Met in Philadelphia May 1787 to revise Articles of Constitution.
39:30. Madison and Washington are NOT the heroes we thought they were!
The original Founding of Constitution was on 15 Nov – same date as Pres Trump’s speech.
40:15. We are privileged to witness the FALL of a power structure that has controlled and shaped societies worldwide.
40:45. US Marine Corps has been authorised to arrest the traitors in US Military.
41:50. Tribunals in WH have been concluded. Elections around the world are being stolen.
42:30. The crime of governments worldwide, at the behest of their financial masters, was to implement a series of events, which would have resulted in the TOTAL ENSLAVEMENT OF ALL HUMANITY – the money tells the story.
43:50. Non-military combatants have been designated as terrorists, are are being arrested for LARGE SCALE public TRIBUNALS, which will take place next year.
44:30. The plan is to catch the deepest, most disgusting WORLDWIDE EVIL, and to snuff it out.
45:40. We in the digital army are ESSENTIAL to dismantling the MATRIX that has caused so much pain to so many, for so long.

46:45. Symbolic dates in near future.
47:35. Misdirection, deception and disinformation in a necessary part of this conflict. 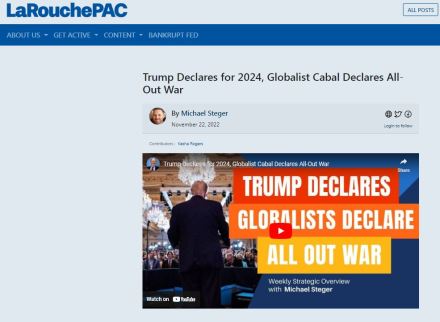 It’s on! Our nation’s enemies are pulling every asset they have out into the open, to try to stop Donald Trump and his movement. The Justice Department has been fully weaponized by the White House with the appointment of the serial-prosecutor, Jack Smith. The billionaire donor class is openly abandoning Donald Trump (and giving up any leverage they might have over future policy). And, on our side, Trump’s announcement on Tuesday threw down the gauntlet for patriots.