I was blessed by a couple of contacts upon getting online today to check before a needed walk to relax me for this blogging day. After completing my action list I realised I needed to add what Veronika West posted yesterday – making 14th item (LOL am far too ambitious but a great deal is happening; note that number). Chewing that and her update over with the Lord during a morning walk, I know it needs to be first. So I note Veronika has posted the following update on Ignite Ireland Ministries:

“A POWERFUL ENCOUNTER CONCERNING 18 STATES OF THE USA”…

“Ok friends,…I wanted to share this with you all,…I was alerted yesterday by a kind lady called Michael Ann Rivera,…to a powerful prophetic word given to the late Prophet Kim Clement on the 20th April 2007,…(14) yrs ago….as I don’t have access to the online group where this word was shared; this kind lady Michael took a picture of the word,…(see 2 captions below)…it seems a small part of the word is missing in the pictures but I will post the full word given to Kim Clement below…!! 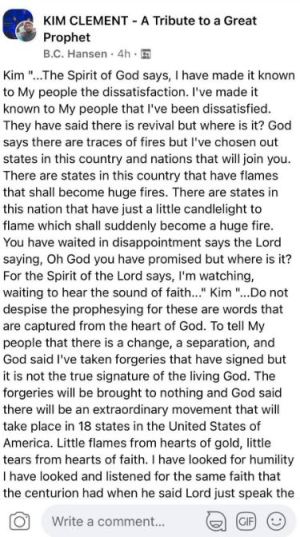 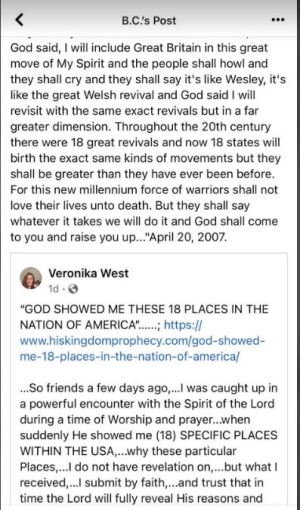 On reading this prophetic word what struck me first was the year Kim received the word 2007 and the timing of the two encounters I had with the Lord,…2021…(14yrs later)…7 is God’s number of Perfection and Completion….7×7….when seeing this it immediately reminded me of the word I gave recently on the Lord taking NATIONS FULL CIRCLE; God’s Justice Moves Within the Sands of Time

….We have certainly entered into a time where God is bringing things to an accelerated place of completion and perfection within the Nations…!!!

I received this word about 18 States through two very intimate encounters with the Lord, … the first encounter also came in a time of Worship and Prayer,…where I received a vision of the first 9 States,…after that initial encounter,…I journaled all that I heard and saw,…but I was led to wait for more revelation,…as I felt the Lord was not yet finished revealing His heart to me,…hence I waited another 3 months and then on the 20th of October being the 10th Month 2021,…the Lord then took me into a second powerful encounter where He showed me another 9 States,….on coming out of the second encounter,…I waited prayerfully before the Lord on the timing of when to release the Word on all of the 18 States,…and while praying and waiting on the Lord for the timing,…the Spirit of Revelation quickened to me the number (18) and the prophetic being significance of the number (9)…9+9….the number speaking of both “BIRTHING AND JUDGEMENT…then Holy Spirit took me back to the word I gave about a “SIMULTANEOUS MOVE OF HIS SPIRIT WHERE A GREAT HARVEST WOULD TAKE PLACE IN THE MIDST OF GREAT JUDGEMENT;…see word; America: A Great Shaking, Separation and Shifting

….To say the least the 2007 Word released by Prophet Kim Clement absolutely astounded me when I read it,…as it mentions my own Nation,…GREAT BRITAIN,…the Lord gave me a word recently about “A DO IT AGAIN ANOINTING”…that would be released in this season,…see word;  Get Prepared For a ‘Do It Again’ Anointing

….I saw many suddenly receiving this DO IT AGAIN ANOINTING and they would be strategically taken by God into places within my own Nation and other Nations where Past Great Revivals and Awakenings took place and they would begin to cry out “DO IT AGAIN”…and the Fire of God would fall and the Ancient Wells of Revival would be uncapped and an even greater move of the Spirit would begin to take place in those areas.

…Furthermore, this also reminded me again of the word I released at a Conference in London at the beginning of 2020 where the Lord had me prophesy about the REBUILDING OF ALTARS OF AWAKENING AND WELLS OF REVIVAL BEING UNCAPPED,…see word; A Spiritual Showdown Has Begun

Kim “…The Spirit of God says, I have made it known to My people the dissatisfaction. I’ve made it known to My people that I’ve been dissatisfied. They have said there is revival but where is it? God says there are traces of fires but I’ve chosen out states in this country and nations that will join you. There are states in this country that have flames that shall become huge fires. There are states in this nation that have just a little candlelight to flame which shall suddenly become a huge fire. You have waited in disappointment says the Lord saying, Oh God you have promised but where is it? For the Spirit of the Lord says, I’m watching, waiting to hear the sound of faith…”

Kim “…Do not despise the prophesying for these are words that are captured from the heart of God. To tell My people that there is a change, a separation, and God said I’ve taken forgeries that have signed but it is not the true signature of the living God. The forgeries will be brought to nothing and God said there will be an extraordinary movement that will take place in 18 states in the United States of America. Little flames from hearts of gold, little tears from hearts of faith. I have looked for humility I have looked and listened for the same faith that the centurion had when he said Lord just speak the word and my paralyzed servant will be healed. I am waiting for the same sound. 18 states in this nation have surrendered a sound. God said you have spoken of your yesterday and your former years. You have said God did so many great things in the great revival in Florida. God did so many great things in the Toronto revival. God said, do not speak of former things now; speak of things that are about to come upon you as the church, says the living God…”

Kim “…God says, listen because you have done this, because you have allowed America to burden you and rest upon you, I will bring you in as if you were one of the states of America. And they will say is there a 19th that will come in, and God said, I will include Great Britain in this great move of My Spirit and the people shall howl and they shall cry and they shall say it’s like Wesley, it’s like the great Welsh revival and God said I will revisit with the same exact revivals but in a far greater dimension.

Throughout the 20th century there were 18 great revivals and now 18 states will birth the exact same kinds of movements but they shall be greater than they have ever been before. For this new millennium force of warriors shall not love their lives unto death. But they shall say whatever it takes we will do it and God shall come to you and raise you up…”