Our sister Veronika’s word in the previous post on the Lord exposing ‘works of sleight of hand’ and warning ”Sheep Nations must stop feeding the Cuckoo! America is feeding the Cuckoo!”, began to come to her Saturday morning and “kept swirling all weekend”, drawing to its fuller conclusion on Tuesday morning, as posted. Bear with me as I summarise with emphases:

Veronika asked Holy Spirit about that warning and He immediately said, ”Look to the Cuckoo, a parasitic bird, for its work is an abomination in My Sight. This bird is an imposter which has taken over the nest!”

Upon checking a bird-manual about the cuckoo being an ‘imposter’ bird, she heard The Spirit say, ”America is feeding the Cuckoo!” AND, “As I heard those Words, suddenly ‘Joe Biden’ (an imposter) and the nation of China (also an imposter) both came up before me and I heard these Words, ”Listen! Watch and be alert! Pay close attention! For in this season, the sound of the Cuckoo… Cuckoo… will be heard. For the time of Divine Exposures and a Righteous Unraveling has begun to take place in the Nations.

“Watch, as the works of the sleight-of-hand will be uncovered and revealed.

“Watch, as My Governing Hand moves to expose the demonic spirit of an imposter in the midst of you!

“Watch, as I move strategically in the days ahead to cut off and stifle the supply lines that have fed the Cuckoo, for the cry of the ravenous Cuckoo will soon be silenced!”

Veronika posted that word on Fbk around lunch-time British Summer Time yesterday and I got around to publishing it about 5:50 pm. Then, 4 hours later, Tim Shey far over ‘the Pond’ in Idaho, where it’s 3pm mid-afternoon, comments and provides a captured screenshot of this tweet posted in Italy:

“Perfect timing. This morning I read where Cesare Sacchetti describes Biden and Harris as “two imposters”

Fortunately, I was able to check Tim’s reference and its cited source soon after receipt and noted Cesare’s tweet timed about 7.20am in Italy (midnight Monday for Tim). That’s one hour ahead of BST, and round about when Veronika was receiving the last part of the ‘cuckoo’ word. Cesare’s source CDMedia was published the previous evening New York time and states:

‘As multiple cameras provide full transparency to the election audit currently underway in Maricopa County, AZ, reports are the auditors are already finding evidence of systematic election fraud that will delegitimize *President Joe Biden’s administration, embarrass the GOP Establishment, and could lead to multiple criminal prosecutions.

‘On Sunday, forensic experts confirmed they are examining thousands of ballots cast in November as part of the audit in the Grand Canyon State. They are using ultra-violet lights to search for ballot watermarks and weed-out phony ballots. Additionally, auditors have been split into several groups with some examining mail-in ballots and others inspecting ballot folders, envelopes along with other related items. Officials said evidence of systemic fraud has already started to show….reported OANN. 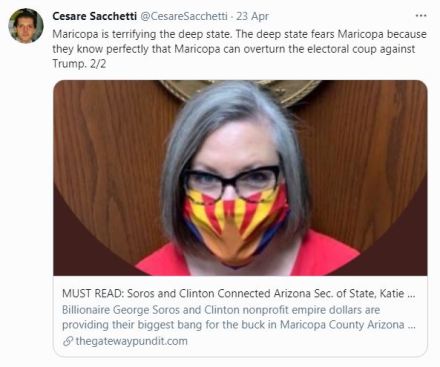 An intercessor living in the centre of the British Isles and Ireland wrote me on Saturday drawing attention to that state’s zip-code abbreviation:

“In prayer this morning I was holding Arizona before the Lord that justice is done. AZ as it is initialed the beginning and the end – I heard …“Arizona is My Alpha and Omega”…

“The Alpha & Omega will not be thwarted, or cancelled.”

Veronika informs me a lady sent her a link to the latest from his prophetic prayer journal that Timothy Dixon recorded a few hours ago. “It speaks to the last part of the word I received on the CUTTING OFF AND STIFLING OF SUPPLY LINES THAT FEED THE CUCKOO. VERY INTERESTING” (https://fb.watch/58Q8sJVaxO/ – link to Facebook) 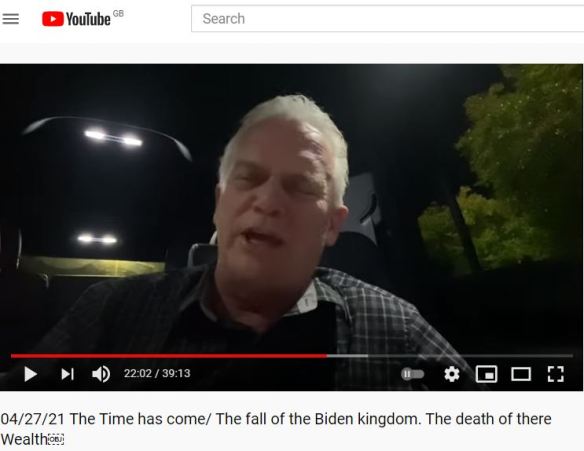 I note at 22:00 (of course!!) that he says an angel explained the vision and that the wealthy who connived to corrupt and rig the US election will suddenly lose all their fortunes as the angle’s mighty axe is laid to the roots to stop the blessing that has come to America and which corrupt business, financial and political leaders and their secret societies’ dark state have used for nefarious purposes. Their riches will fall even in a single day – a turnaround comes in just the instance of  a day!