[About] ‘Judicial Watch, Inc.is a conservative, non-partisan educational foundation, which promotes transparency, accountability and integrity in government, politics and the law. Through its educational endeavors, Judicial Watch advocates high standards of ethics and morality in our nation’s public life and seeks to ensure that political and judicial officials do not abuse the powers entrusted to them by the American people. Judicial Watch fulfills its educational mission through litigation, investigations, and public outreach.

‘The motto of Judicial Watch is “Because no one is above the law”. To this end, Judicial Watch uses the open records or freedom of information laws and other tools to investigate and uncover misconduct by government officials and litigation to hold to account politicians and public officials who engage in corrupt activities….’ 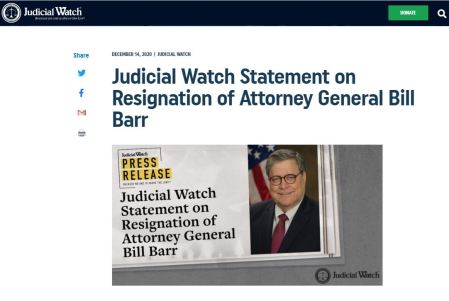 ‘Attorney General William Barr, after getting off to an excellent start by shutting down the corrupt Mueller investigation, failed to restore public confidence in the fair administration of justice by aggressively pursuing the unprecedented and illegal Obama-era spying abuses targeting President Trump. AG Barr was unfairly maligned by the Left because they feared he might prosecute their political allies. Instead, the reality is too many politicians and corrupt government officials seemed to get special dispensation from the Barr DOJ – Obama, Biden, Clinton, Comey, and McCabe, to name a few. Right now, for example, the Barr Justice Department is protecting Hillary Clinton directly by trying to shut down all Judicial Watch Clinton email discovery and FOIA lawsuits, while withholding the release of the Obamagate-era emails and texts of the Page / Strzok / McCabe anti-Trump cabal.

‘The Justice Department was a black hole in terms of transparency under Attorney General Barr.

‘It is imperative that President Trump take immediate steps to expose the full truth about the Obama administration’s spying and abuse of President Trump and other innocents, such as General Flynn. Americans are right to expect action, justice, and accountability from Special Counsel Durham on the worst corruption scandals in American history. Also, President Trump should ensure that the exploding Biden and election integrity scandals are fully investigated by the DOJ and other federal law enforcement agencies.’