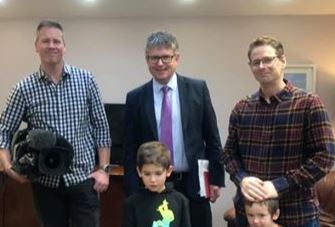 Some may recall Revd Christopher Wickland’s prophetic messages posted on this blog, but hundreds have been praying for his recovery after an unexpected heart attack some weeks ago. His totally unexpected recovery has featured in national, local and overseas press as well as on radio; and his TV interview features on tonight’s BBC South Today!

Click to read full article (not in new window) 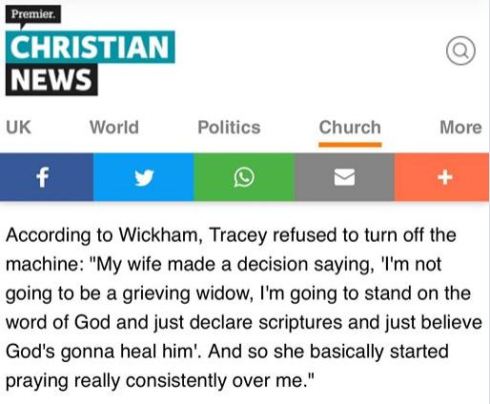 Premier Christian News reports, ‘Rev Chris Wickland stopped breathing after he collapsed at a trampoline park he was attending in Southampton with his children. Staff members at the Flip Out centre performed CPR on the pastor and administered four electric shocks with a defibrillator after his heart stopped beating, at which point Wickland began breathing again and an ambulance arrived.

‘Wickland, who is the senior pastor of Living Word Pentecostal Church in Fareham told Premier that paramedics who arrived on the scene were amazed by his recovery: “In 24 years of work, they said they’ve never seen anyone come back after a fourth shock.”

‘He claims he was resurrected by the power of prayer. After his collapse his daughter contacted his wife Tracey who told the children “to pray for him immediately”.

“Then immediately my wife put it out onto the prayer network and our churches and it hit social media and just went out everywhere. So lots of other churches picked it up and started praying. For the next several days we had like literally hundreds of Christians all over the world and churches praying for us,” he added.

‘Wickland was rushed to hospital after the incident and put into an induced coma. He remained on life support for a number of days (being) unable to breathe independently. Doctors had warned Mrs Wickland his chances of survival were unlikely once he was taken off the ventilator and said if he was he’d likely suffer severe mental damage due to the lack of oxygen…’ (emphases added)

So we praise and thank you Lord of Lords and King of Kings for your answering prayers and blessing this dear family.