Just love it when even the numbers confirm content of revelation. This was published 6 months ago by His Kingdom Prophecy on 11 July 2019 and following the previous post on Veronika’s vision of the ‘2020 D00R’ we again notice the stressing of numbers, and in particular relating to the timing at ‘two twelves’:

2020 – A YEAR FOR HEALING, VISION, JUDGEMENT, JUSTICE AND TRUMP

Some of you may have listened to the video I put out yesterday concerning a powerful dream/ vision I received last night about the year 2020.  I felt the need to write out the dream for those that prefer reading, than to listening to an audio.  Here goes…!

Greater Weightiness of His Glory on the Earth..!

So, just after midnight, 12:12 a.m. to be precise, I was caught up a powerful dream/ vision where I found myself standing in what felt like a holy and sacred place.

From this realm of The Spirit, I could see all the nations of the earth.

As I stayed watching in the dream, suddenly I saw the numbers ‘2020’ come up before me and the numbers were made of solid gold.

Now as I looked again at the numbers (2020), I could tangibly feel in the realm of The Spirit the weight of the solid gold numbers which were very, very heavy, and then I heard these words, “The year 2020 shall be a year where an even greater weight of My Glory will be released into the nations of the earth!”

Then I watched as the solid gold numbers began to shift and the numbers 2020 were completely rearranged and changed.

I saw the numbers becoming a solid gold hour glass (see; picture drawn of what I saw).

Then I heard these words, “Watch!  The Sands of Time stand over the nations, for the year 2020 shall be a kairos year, a time of action and Kingdom Advancement in the earth.

A year where things will come to a head, a season of divine appointment and a time of great birthing in the nations of the earth!”

As I heard those words, suddenly I saw the sand within the hour glass turn to seed and I heard these words, “The year 2020 shall mark the beginning of the greatest harvest of souls, a year to reap that which has been sown into the earth.

“Yes!  A year of full maturity and a greater manifestation of My Glory in the nations!”

Then again the dream shifted and I saw the seed within the hour glass turn to wine.  I then heard these words, “Watch!  For now the old wine skins shall be replaced by new wine skins.

“2020 shall be the year of the greatest outpouring of new wine upon the nations of the earth!”

Eyes of the Prophets and Watchmen… The Blind Eyes will be opened…! 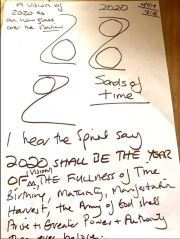 On hearing those Words, suddenly the dream shifted and I watched as the hour glass was yet again, changed/ dismantled, and then I saw the two ‘0’s, which were the two glass balls of the hour glass, coming together to form what looked like two eye balls/ two eyes ‘00’ which appeared over the nations.

I then heard The Spirit say, “The year of the eye.  The year of 2020 vision.  For the eyes of My prophets shall be enlightened and they shall see as I see, and the eyes of the eagles shall behold My Glory in 2020.

“Watch for signs, wonders and miracles as the eyes of the blind will be opened!

“Watch!  As My faithful watchman shall receive 3-dimensional sight, for now I AM releasing new strategies, greater wisdom and understanding of the times and seasons to My Watchers on the earth.”

Then I was shown the ‘two eyes’ again and I watched as the two eyes moved to and fro across the nations of the earth as I heard these words, “My Eyes shall run to and fro throughout the whole earth, to give strength to the blameless, and to those who are walking righteously.”

The year of the Wheel and the Key;  Revelation and Governmental Authority!

Then the dream shifted again and I saw that both the “2’s” had also come together to form the ‘number 22’, and I heard these words in the realm of The Spirit, “Now watch and pay attention!

“For 2020 will be the year of the Wheel and the Key, and the Wheel of Revelation shall spin with great acceleration and the Governmental Key of the House of David will be turned unlocking the door that is shut!”

And then I saw the numbers 2020 appear once again.  Then I heard seven (7) loud blasts of a trumpet go forth upon the nations of the earth and a great Army began to rise up from the nations at the sound of the trumpet blasts.

Latter Rains shall be Greater than the Former Rains..!

Now as my eyes looked at this great Army rising up in the earth, I heard these words, “The latter rains shall be greater than the former rains.  Behold!  My Latter Rain Army now rises in the nations of the earth!”

Then I saw again the Spinning Wheel and the Key appear over the rising Army, and the Wheel was set blaze by Fire and was spinning round and round with great speed.

Then I heard the sound of turning and I looked at the Key which had begun to turn, and I heard these words, “My Latter Rain Army shall carry the Governmental Key of The House of David upon their shoulders, and like the Spinning Wheel of Fire, they shall move and advance with great acceleration and momentum in the earth.

“For these are the days of My Glory and My Heavenly Government being established in the nations of the earth!”

The Smoke/ Glory will fill The Temple;  Judgement and Justice comes to The House of God;  Two Doors…!

As I stayed listening and my eyes looked again at the Spinning Wheel of Fire, suddenly I saw smoke rise up in the midst of the great Army and I heard these words,“And the temple was filled with smoke from the Glory of God!”

Then again I heard the sound of turning that could be heard in the realm of The Spirit and I looked at the Key and the Key of David was being turned.

Suddenly I saw two doors appear before me in the dream.  The first door I saw had the words “House of God” written above it and I heard The Spirit of Revelation say, “For the time is come.  Judgement must begin in The House of God.”

Then I watched as the first door was opened, and again I heard The Spirit speak, saying “For the time is come — Judgement must begin in The House of God.”

Then my eyes were drawn to the second door which had also appeared before me and I saw the words, “Most Holy Place” written upon it.

But as I looked at the door, I saw two flaming swords ⚔️ which formed a cross (x) standing over the entrance of the door that led to the “Most Holy Place”, and the door remained shut.

Then I heard The Spirit of Revelation say, “Watch and pray!  First must come My Justice and Judgement —  then the Door that leads to the Most Holy Place shall be opened!”

Blessings to you all.
~ by Veronika West

Timing at 12:12 or ‘two twelves’ with direct reference to 22 confirms the incidences of those numbers not only in recent months but also and more especially in connection with a numerical validation of details of my encounter with the Lord, as told herein. And then there’s the quadruple 12s relating to Veronika’s prophecy on General Election!

6 thoughts on “Veronika West: 2020 – A year for healing, vision, judgment, justice and Trump”