‘A matter must be established by the testimony of two or three witnesses.’ (Deuteronomy 19:15 – NIV)

I’m grateful to the Lord and the three prophets who brought the following on Sunday 13th October. It is especially valuable in view of today’s Brexit negotiations in which Northern Ireland’s Democratic Unionist Party’s (DUP) role is critical.:

‘DONKEYS AND COCKROACHES‘
FOR SPECIFIC INTERCESSION STRATEGY FOR THE UK!
Given by; Yvonne Coombs, Rick Davis and Veronika West..!

Yvonne Coombs – ‘Last night just before falling to sleep I pictured being in a meeting with Boris Johnson and I heard “ A DONKEY DON’T SPIT ON THE PAVEMENT, BUT A COCKROACH LIES THROUGH HIS TEETH!”

‘I took this to brethren this morning and, after the initial 😂 emojis, an important unravelling began. I am adding what Veronica West and Rick Davis brought to the table for this AWESOME RIDDLE of the Holy Spirit.

‘Rick spoke of the donkey reminding him of Balaam’s ass [Numbers 22 – RB]. “God caused Balaam’s ass to rebuke and save Balaam even though Balaam beat the donkey for not going forward because of the angel in the way. The question is; who is the donkey, and who is the cockroach?”

‘I believe this part of the Holy Spirit riddle in that, as spoken before in previous words, we are to ‘listen’ and not move unless God and not man speaks to MOVE!’ 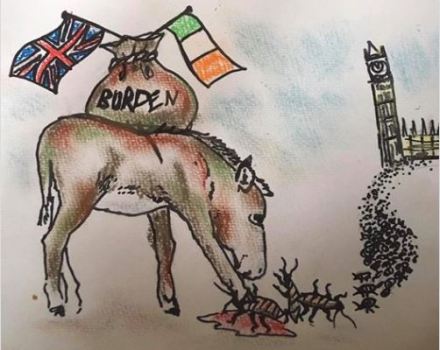 Veronica West –
‘I believe that the Donkey and Cockroaches are speaking at multi-levels, prophetically I believe it speaks to two specific types of powers and principalities at work in this hour and YET again I believe it also speaks symbolically at another level. The donkey is symbolic of the DUP, the donkey is stubborn and yet it carries GREAT WEIGHT!! Burden bearer!! The spitting; the DUP WILL NOT SPIT ON THE SIDEWALK THEY WILL NOT COMPROMISE WHAT THEY BELIEVE…!

‘The cockroaches are those who are fighting against democracy; they are being demonically fuelled by lies and corruption, and like cockroaches they continue to come out of the woodwork, working relentlessly against the Will of both the Donkey/DUP and the people/Nation as a whole.

‘The donkey will not move, yet it is carrying a heavy weight upon its back. It will not lower its standards or Compromise its values by spitting on the side walk, it will maintain its dignity and continue to STAND STEADFAST. Its stubbornness can be its greatest strength and yet the grace given by God to carry its load.

‘The demonic cockroaches MUST BE DESTROYED, the cockroaches hate the light and run as soon as they are exposed. The cockroaches are the CORRUPT ‘REMAINERS’ who are working to overturn the vote.

‘Let’s us pray that the DONKEYS REMAIN STRONG AND STEADFAST, AND THAT THE COCKROACHES ARE EXPOSED AND DESTROYED..!

‘I believe Boris is dealing with DONKEYS AND COCKROACHES, ONE IS A LIAR WHILE THE OTHER IS STUBBORN/STEADFAST AND WILL NOT MOVE.

‘There is a Spiritual showdown that is underway, the DONKEYS AND COCKROACHES are going to be difficult for him to deal with. He has the stubbornness of the donkeys that refuse to budge, and yet he has the lying deceitful cockroaches that are coming out the woodwork.

‘WHILE THE DONKEYS ARE SYMBOLIC OF THE DUP, I BELIEVE THEY CAN ALSO REPRESENT US AS THE CHURCH/ECCLESIA; WE FEEL/CARRY THE WEIGHT OF THE DESTINY OF OUR NATION ON OUR BACKS THE SPIRITUAL BURDEN IS HEAVY BUT WE MUST REMAIN STEADFAST UNCOMPROMISING AND CRY OUT FOR MORE GRACE IN THIS HOUR.

‘LET US CALL OUT FOR THE LIGHT OF HIS GLORY TO EXPOSE EVERY LAST FILTHY COCKROACH THAT IS HIDING AND BREEDING UNDER THE COVER OF DARKNESS.

‘I SEE; The cockroaches are being fully exposed, the light of His Glory will flush them out!!! We must be faithful to pray for the Donkeys/DUP/ECCLESIA, that they continue their holy stubbornness and that they will continue remain steadfast and that they will RECEIVE MORE GRACE AND WISDOM for the burden that they are carrying in this hour.

‘As I was praying just now, I saw JESUS RIDING ON A DONKEY!! Jesus chose the donkey for SO MANY SYMBOLIC REASONS. The DUP are hand-picked by God to deliver BREAKTHROUGH FOR THIS NATION, The DONKEY IS GOD’S CHOICE…! HUMILITY AND BURDEN BEARER.

‘It’s not so much stubbornness but STEADFASTNESS PERSEVERANCE LONG SUFFERING.

“OUR BREAKTHROUGH AS A NATION WILL COME RIDING ON THE BACK OF A DONKEY”.
The Nation has been the Donkey of the EU. God has raised up the DUP to be the ones that WILL NOT MOVE or spit on the side walk/COMPROMISE ITS VALUES.’

‘Rick – reminded us of the triumphant King, who rode into Jerusalem on the back of a donkey. He is riding in on the back of His Ekklesia to bring deliverance from a deeper enemy of the nation than a political subservience. It is from the enemy of our souls and the soul of our nation!
‘Psalm 118 says, “We celebrate the feast in triumphal entry with thick boughs even proceeding up to the horns of the altar.” The altar was and is the Cross!’

‘LET’S PRAY STRATEGICALLY IN THIS HOUR. The Spirit of God said this to me a few days ago, “MY WARRIORS MUST BECOME BETTER AT HEARING AND PRAYING STRATEGICALLY. TOO MANY HAVE A SCATTER-GUN APPROACH – THEREFORE THE ENEMY GAINS GROUND…TELL MY WARRIORS TO COME UP HIGHER, TO DIG DEEPER AND TO STEADY THEIR AIM, FOR THE ENEMY SEEKS TO GAIN GREATER ADVANTAGE IN THIS HOUR”...!

‘Let us PRAY FOR THE DUP; DONKEY UNITED in PURPOSE, as they will take centre stage again in these next few weeks. DUP MUST REMAIN STEADFAST AND UNCOMPROMISING.

‘THE CHURCH/ECCLESIA MUST STAY STEADFAST UNCOMPROMISING AND IMMOVABLE IN OUR PRAYERS.’

One of the dozens of commentators on their postings poses a most pertinent question about the painting, “Why has no-one mentioned the eye in ‘Big Ben’?“. Yvonne advises that it it wasn’t done intentionally and asks for Jill’s opinion, viz:  “Freemasonry – ‘all-seeing eye’. Same eye as in Supreme Court…. “

Jill then provides a link to BBC’s Inside The Supreme Court, the introductory illustration to which plainly shows the layout of furniture and carpets viewed from the ceiling, and to which I remark, “Definitely deliberately designed to represent an eye!!”

Puzzle In Sky by Idea Go, courtesy of Freedigitalphotos.net