The Father has delivered and drawn us to Himself out of the control and dominion of darkness and has transferred us into the kingdom of the Son of His love, in Whom we have our redemption through His blood, the forgiveness of sins. [St Paul’s letter to the Colossians 1:13-14, Amplified Bible.]

To continue my testimony upon my 33rd spiritual birthday:

As well as checking out Christians’ claims of hearing God direct and getting astounding personal evidence for that, I wanted to know lots more not only about Him, but also and especially to follow-up on the personally revelatory scriptures about false teachers.

In my great wariness of religious folk I’d assumed none would be able to comprehend my story because they’d be ignorant about those things. Doubtless, none would have been through my kind of bad, meditative ‘trips’ – or so I thought!

But direct help was again at hand from the Bible’s Author…Yet first, there’s one little-suspected aspect of His character that amazingly revealed a very personal thought and thus confirmed He knows all about me. Here’s what had happened many years earlier.:

The mundane event of a dinner party in mid-1980s played an unsuspected, pivotal part in my journey into freedom. It was held by young parents, the father being in training as an Anglican curate, and it included his vicar and a couple from Cheam Baptist Church in Surrey. We got around to chatting about our philosophies of life but those folk were like ‘aliens’ as compared with my highly ‘enlightened’ viewpoint!

I was surprised the vicar was open-minded and seemed to agree with New Age claims that all religions lead to God; like spokes of a wheel are connected to a hub.

The Baptist couple, however, would have absolutely none of that and strongly disputed my views. I was quietly outraged – what closed minds, so ignorant!

I recall thinking, “Baptists are such Biblical bigots – I’ll never touch them with a barge pole!” However, I never expected this was all borrowed! This vow would come to be used against me…twice! That is, I was yet to discover the Lord God has a sense of humour!

Soon after the dinner, the curate invited me to a public meeting with a guest speaker, John Richards. It was a memorable occasion for three reasons; first, his name is mine in reverse order – secondly, for his gently confronting me upon noticing a small pin on my jacket’s lapel displaying a cross within a star of David. He asked, “What does your family say about that?” I retorted “Nothing! What’s it got to do with them?” After all, my family was aware of my search for lost wisdom. But John was referring to a church ‘family’ – which didn’t apply because I wasn’t a churchgoer!

Therefore, I had nothing further to discuss with this speaker and listened warily to his accounts of investigating witchcraft and satanism as secretary to the bishop of Exeter’s study of exorcism, later as advisor to the Archbishop of Canterbury. It was all irrelevant in view of my disliking the ‘black stuff’ (including freemasonry) – but who was I kidding? Only myself!

So for many years I gave no more thought to that meeting…BUT the fact it did play a significant part in my long journey has been confirmed by John Richards’ name popping up 47 months after first publication of this post – and ’47 is my birth year!. In September 2017 at conference on healing in Guildford I attended a session by the bishop’s advisor on deliverance. He started by sharing his personal testimony and how it involved his spiritual director, John Richards!

Now, let’s return to events soon after that dream encounter with Jesus…

THE JOKE’S ON ME

Wondering about the sort of church that organised the trip to see Billy Graham, I met with little help from Peter. Yet I wasn’t really bothered because they should all be part of the Lord’s body without making any distinction, in my opinion. I didn’t appreciate Peter’s was undergoing internal upheaval because the leaders wanted to learn more about the Holy Spirit, whereas many were wary of anything other than the straight scriptures. The church had been planted by Reading Baptist Church and was known as Tilehurst Free Church (Baptist), the leaders of which planted house groups west of Reading.

Some time after I joined TFC, one of them outraged me by saying “God has a sense of humour!” – that was against my straight-laced Catholic upbringing!! Years later I realised the truth of that quip, and that I’d forgotten my vow against Baptists but the Lord hadn’t! Therefore, He’d put me in a Baptist church to learn the Truth about Him and get a solid grounding in His Word – as the saying goes: ‘He Who laughs last, laughs longest!’ 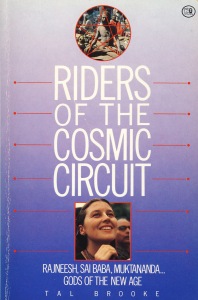 Whenever I went into a local Christian bookshop my long-standing sensitivity to serendipity would kick in! That is, a book would jump off the self at me! The Lord was directing me to biographies of Christians who’d previously been tied into New Age activities – just like me. They’d been rescued from terrifying situations by calling upon Jesus’ name. So, their true stories brought home what had really happened in that stunning dream. As mentioned, St Paul’s insight on satan’s ability, and that of its followers, to masquerade as an angel of light and as servants of righteousness (2 Cor 11:14), confirmed the reality of my dread encounter with devouring darkness. I’m so deeply grateful to the real living God for saving me.

Having been deceived and beguiled, scales were now starting to fall from my eyes – an awesome awakening and a homecoming! 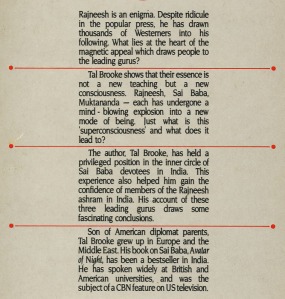 Riders of the Cosmic Circuit (1986) by Tal Brooke was one of those influential books. The son of American diplomats and a pioneer in meditation with crystals, Tal held a privileged position in the inner circle of the revered Indian guru Sai Baba, of whom he later wrote, “I had discovered an absolutely satanic thing operating behind Baba’s veneer”.

Tal’s own encounter with the darkness behind the ecstatic light and consciousness known as the state of ‘nirvana’, validated my psychic dream experience.

The very first of these autobiographies, however, was by someone who’d also been in the brotherhood I’d been initiated into.

Whilst reading the concluding chapters of Roy Livesey’s account over the lunchtime of 29 March 1990, I prayed the ‘sinner’s prayer’ and gave my life to Lord Jesus as my personal saviour. Driving home later, however, the spiritual enemy tried to get me into a couple of road accidents. And upon arriving home I found it had attempted to burn down my new, wooden-framed house. Thank you Lord for protection through both events – the fire had been put out by throwing water onto flaming fat in an electric oven!!

Jesus tells all who believe in Him what will happen as a result of following His teaching, as noted here and here by John, one of His first and closest disciples,.:

NOT YET FULLY FREE

From those who’d trodden the very same path as me, I learned the great importance of being completely cut off from my ‘old life’. This meant getting rid of books and objects associated with it, but I’d been slow to so do. Although I’d turned away from that past, yet an unseen bond seemed to remain.

The fact of that subtle influence needed dealing with because I wanted what’s promised in the Word inspired by Father God, the Author of the Holy Bible:

So if the Son liberates you, then you are really and unquestionably free. [John 8:36 Amplified Bible]

Next, learn how I gained my freedom at long last from satan – my chains fell off!!

[First published as in October 2013 as part 6 (Rescued From Satan By The Lord of Hosts) of my ‘Journey Into Freedom’. Bible quotations courtesy BibleGateway.com]