As I’m preparing this it so happens I’m in touch with Veronika over a matter of polite opposition to my posts on Donald Trump. I write this indicates we must be ‘on target’ (as blogged before) and that the Lord usually brings reassuring confirmation, quickly. IN FACT, it was almost immediate because by return she adds this most poignant insight:

“Just noticed something,..the picture I posted with the recent Prophetic word of the two women depicted in the Story in 1 Kings 3 was really just a random picture I chose because I liked it,..but while looking at it again the Holy Spirit drew my attention to the robes the women are wearing,..one RED AND one BLUE,..the colours of the Political parties (RB: Red for Republicans, Blue for Democrats) but also the RED robe speaking of LIFE AND BLOOD OF JESUS.

Interesting to note also that the woman wearing the RED is actually wearing a RED SHAWL THAT COVERS HER WHITE DRESS,…(The WHITE speaking to Purity and…RED speaking to the BLOOD THAT COVERS)..!!

..Ha!!…Not such a random picture after all….But once again we see God is certainly in the smallest of details.”

SO I respond, “We’ve got the Lord’s confirmation!”

AMERICA: WILL THE REAL MOTHER STAND UP!

America: Will the real mother stand up! “Bring the Sword, and cut the baby in half!” 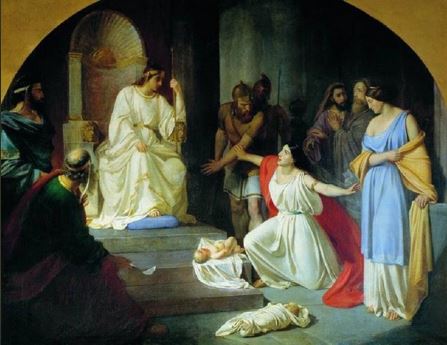 Judgement of Solomon by Nikolai Ge, 1854

So, last night I had a powerful and poignant Dream that I believe speaks prophetically to the hour.

In this Dream, I suddenly heard these Words, ”Bring the Sword, and cut the baby in half!”

As those Words echoed loudly in the Dream, the story of 1 Kings 3:16-28 (below), suddenly unfolded before me, and I watched as two woman and a beautiful baby boy were brought before The Supreme Court of America [SCOTUS] and as I looked at the two women standing in The Courts, I saw in the Dream that one woman stood for Life, and the other woman for Death.

As I looked at them again, suddenly I saw two Altars rise in their midst, and then the beautiful baby boy was held up for The Judges to see, and a fight broke out between the two women over who’s baby it was.

Suddenly I heard these Words again, ”Bring the Sword, and cut the baby in half!”

As I watched this unfold, suddenly I heard the sound of a Gavel hit a wooden block, and as the sound of the Gavel echoed loudly throughout the whole Courtroom, the atmosphere in the Courtroom suddenly changed, and the woman who stood before the Altar of Death, let out a blood-curdling scream, as the baby boy was handed down to the woman who stood at the Altar for Life.

I watched, as the rightful mother was revealed, and she received the Justice she came for.

But then, suddenly the Dream shifted, and I no longer saw the two women standing before the Courts, but the two Altars remained, and I heard these Words,

”Listen! For the blood of the innocent cries out day and night in My Courts!

Watch! For a Spiritual Showdown shall take place between life and death, light and darkness, for even as Nations rises against Nation, so shall States rise against States.

For surely, a Nation once called “United”, shall no longer stand as One Nation under God!

But look! Did I not say that two Altars would rise?

For a great Spiritual Showdown will take place, as the Altars of Cain and Abel emerge in the midst of a Nation being sifted and separated, and a Great Divide will begin to take place, as Sheep States come out from among them, and Goat States run to worship at the Altar of Cain!

Watch and pray! As the plumb-line of My Justice falls upon a Nation, now under Divine Reconstruction.

See! For fault-lines and tectonic plates will move, as cracks deepen, for as political tensions grow and intensify in the days ahead, boundaries lines will suddenly be shifted and rearranged, and the landscape of The Nation, once United, will forever be altered and changed.

So again I say, Watch and Pray, as a Great Showdown now begins to take place!”

Solomon makes a difficult decision.
“16 Some time later two prostitutes came to the king to have an argument settled. 17 “Please, my lord,” one of them began, “this woman and I live in the same house. I gave birth to a baby while she was with me in the house. 18 Three days later this woman also had a baby. We were alone; there were only two of us in the house.
19 “But her baby died during the night when she rolled over on it. 20 Then she got up in the night and took my son from beside me while I was asleep. She laid her dead child in my arms and took mine to sleep beside her. 21 And in the morning when I tried to nurse my son, he was dead! But when I looked more closely in the morning light, I saw that it wasn’t my son at all.”
22 Then the other woman interrupted, “It certainly was your son, and the living child is mine.”
“No,” the first woman said, “the living child is mine, and the dead one is yours.” And so they argued back and forth before the king.
23 Then the king said, “Let’s get the facts straight. Both of you claim the living child is yours, and each says that the dead one belongs to the other. 24 All right, bring me a sword.” So a sword was brought to the king.
25 Then he said, “Cut the living child in two, and give half to one woman and half to the other!”
26 Then the woman who was the real mother of the living child, and who loved him very much, cried out, “Oh no, my lord! Give her the child — please do not kill him!”
But the other woman said, “All right, he will be neither yours nor mine; divide him between us!”
27 Then the king said, “Do not kill the child, but give him to the woman who wants him to live, for she is his mother!”
28 When all Israel heard the king’s decision, the people were in awe of the king, for they saw the wisdom God had given him for rendering justice.” 1 Kings 3:16-28 NLT.

In the days, ahead I believe prophetically, we will see that as these Two Altars take centre stage — one for Life and the other for Death — the choice between Two Masters, and whom you will serve, will become more and more pronounced.

There is a clashing of kingdoms, and a call to which Altar we will bow down to…

I hear The Spirit say, ”Watch! For surely, it will be Nation against Nation; States against states; Church against Church; Brother against Brother; Mother against Mother, and Child against Child.

For My Sword of Truth comes to Divide and Conquer; to Separate and to Circumcise!

““Remember the Law of Moses, My servant, which I commanded him in Horeb for all Israel, With the statutes and judgments. Behold, I will send you Elijah the prophet before the coming of the great and dreadful day of The LORD.
And he will turn the hearts of the fathers to the children, and the hearts of the children to their fathers, lest I come and strike the earth with a curse.” Malachi 4:4-6.

NB: No one is laying blame. Please discern the Word with caution. If you follow my Prophetic Words you will see that I am speaking to NATIONS.

Blessings to you all.
~ by Veronika West

Further to my reference to ‘DIS-United States’ in the previous post, I now also note in her Facebook’s long thread of comments upon the following posted this morning, this response from Veronika:

“At times the prophetic word can be misunderstood and cause some confusion. Hence my word of caution. I ask the Holy Spirit for the Grace to always deliver what I see and hear with wisdom and with revelation without adding or taking away. It may well seem that one Nation is singled out, but I believe the Nation of America is a leader among Nations, hence why God will often speak such strong words to this particular Nation because the Destiny of this Nation effects the Destiny of many many Nations.”