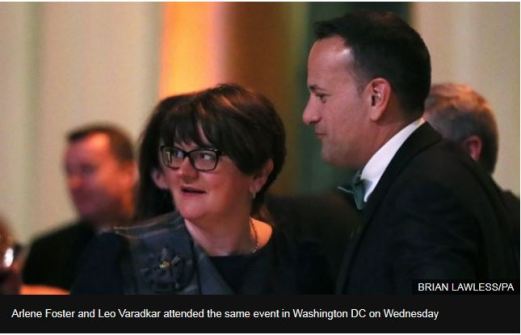 Thank you to Roger Jervois in South Africa for alerting me to BBC News item DUP talk to government about Brexit deal, posted approx 13:30. You will note photo and details are directly relevant to the prophetic word brought by Emma Stark on the Backstop and Irish border, part of which reads:

‘A Brexit deal could still be reached in the next few weeks because the “final part of a negotiation” is when it matters most, the DUP leader has said.

‘Speaking from Washington DC, Arlene Foster said the last part of talks is “when you start to see the whites in people’s eyes”.

‘Her party is in discussions with the government, amid reports it could back the PM’s Brexit deal. This follows MPs’ rejection of the idea of leaving the EU with no deal.

‘Mrs Foster, who is attending St Patrick’s Day events this week, said DUP representatives were speaking to the government and Attorney General Geoffrey Cox about changes to the deal.

“Nobody wants to leave without a deal and we want to make sure we get there,” she told BBC News NI.

‘The DUP leader said her party wanted the UK to leave the EU with a deal, but that her party had certain tests it must meet before they will back it.

‘It’s no surprise that the DUP find themselves centre stage in the Brexit soap opera once again. Their votes have been crucial throughout the Brexit process, and they haven’t been shy of reminding the PM how much power they wield from time to time. That being said, Wednesday night’s votes in Parliament surely did not go how the DUP had hoped. And the government’s publication of its no-deal tariff plans for Northern Ireland have turned up the political heat.

‘Quiet conversations will be happening all across Westminster, and in Washington today, to see if there is any way through this cloud of political smog.

‘Mrs Foster also confirmed that she had discussions with Taoiseach (Irish prime minister) Leo Varadkar in Washington on Wednesday. She said they had a private meeting where they talked about a range of matters, but that Brexit was on the agenda.

‘Meanwhile, the Tánaiste (deputy prime minister) Simon Coveney has said a Brexit extension of 21 months is possible. Mr Coveney told Irish national broadcaster RTÉ that a long extension would give the UK a “reflection period” about the kind of Brexit it wants.

‘He said he believed an extension would be granted as long as there was an associated plan, which might lead to a fundamental rethink.

‘Mr Coveney added that events in the House of Commons on Wednesday night marked a turning point for Brexit. He said it was “very reassuring to show that they don’t want to crash out of EU without a deal”, but accepted that a “crash-out” was still legally possible.

‘It is hoped that Brexit might take a positive turn over the next week, meaning more certainty, he added.’

NB: A week ago today, Arlene Foster was named ‘Female Politician of the Year’ at a prestigious ceremony in London.  (Past winners at the event include Civil Rights Leader Rev Jesse Jackson and former Prime Minister David Cameron.) The DUP leader and Fermanagh-South Tyrone assembly member won the award at the Asian Voice and Political and Public Awards, hosted by Labour MP Keith Vaz. (The Irish News)