The gratitude expressed in yesterday’s declaration on Prayer for “the increase of prayer across this nation, for the established movements and the new movements, for the prayer groups and the individuals”, brought to mind recent calls I’m aware of: eg. the Rallying Cry from ‘Culture Changers’ Hugh & Ginny Cryer, meetings in Plymouth and David Hathaway’s in London.

Also, that these are yet more moves towards the fulfillment of the vision that came to Jean Darnall just over 50 years ago, as mentioned by Malcolm Duncan in 2016, and relate to that Prayer’s purpose: “We declare they will be united in heart, vision and purpose under the headship of Jesus, supporting, strengthening and encouraging each other, that a highway for Your Presence will be built within this land.”

So here’s the full details of the vision:

DURING those weeks a vision came to me. It appeared three different times, during prayer, and it was the same vision each time. Now most of my revelation from the Lord is what I just ‘know’: He makes me know something, and I speak it forth. But now and then I have a vision, and when I do I have a pretty good one! Some people have a very garden-variety type of visions: they’re getting them all the time, you know. But I just have them now and then. And it’s usually a milestone: a turning point or very large directive in my life.

The third time this vision appeared I figured the Lord was showing me or trying to tell me something. I was in Dorset by this time, at St Mary’s (Church of England) with Rev Ken Prior, and I asked him if I could stay an extra day. You know, there’s nothing quite so awkward as an evangelist the day after the meetings are over. But I said, “Could I stay an extra day in the vicarage and pray? I need to find out what the Lord is trying to say to me.” Because up to that point I was really still on my way to Hong Kong. And the Lord spoke to me very clearly. It was a wonderful day. It certainly changed the path of my life.

When I say the Lord spoke to me, I don’t mean that it was an audible voice. But it was a knowing. That strong knowing, like reading at the end of a book and knowing exactly what was going to happen. And you can’t change it: it is written. And so it was written upon my heart, the meaning of this vision.

The Lord impressed it on my Heart that those fires I saw were groups of people whom He would make intensely hungry for New Testament Christianity. They would start reading their Bibles and saying, for instance, as they read the book of Acts, “Well, where is this happy church? Where are these people so full of the power of the Holy Spirit? Where are these miracles? Where is this growth, this vitality, this courage, this boldness that these people had? Is that for today – can we have it today? Should the church be this way?”

And as these questions were being planted in their hearts, the Lord Jesus said He would make them very hungry for the Holy Spirit; He would fill them with the Holy Spirit, and out of those gifts would flow ministries that would enrich the Body of Christ. The whole concept of the Body of Christ would come alive, and barriers between denominations and different types of Christians would break down as people met each other. The Lord said He would move these people all over the country. After he had taught them gifts, he would move them to another place where they would carry that fire, and where they would meet others also who were being renewed by the Holy Spirit. He would put them in different situations from what they were used to, so that they would get to know people of other denominations, other cultures and other classes, and be able to communicate to them the blessings that the Lord had given them. And then He told me that during that time He would also test them. There would be great testing of faith, great waiting times. He would teach them spiritual warfare. He would show them the meaning of the power of the blood of Jesus, the name of Jesus, the word of God and the power of the Holy Spirit.

Phase 2: THE COMING OF THE LIGHTNING

Then I asked the Lord, “What does the lightning stand for?” and he said,
“Unlike the first part, in which I will be speaking to Christians and preparing My church and renewing it and reviving the saints, the lightning represents a second part of the vision, in which I will bring a spiritual awakening to the nation that will be a witness to the unsaved, to the ‘un-churched’, to the non-Christian.
“Through these believers I will bring a witness to this land. They will be an army of witnesses. And I will begin to release their ministries so that when they give their testimonies there will be apostolic signs following and accompanying their testimonies. Where ears have been deaf and hearts have been hard and eyes have been blind, I will touch the people of this land and they will begin to hear the testimony of My people, they will begin to see the manifestations of My power, and their hearts will begin to believe. Thousands and thousands of people are going to come into my kingdom through this army of witnesses, through this people movement – not characterized by any particular evangelist or great organisation at the front, but just My people rising up, led by My spirit and beginning to move forward with a new faith for evangelism, a new zeal to share Jesus with others. And as they give their testimonies, I will release their ministries of healing and miracles, and there will be signs and wonders accompanying their ministries. So many people will be saved, in the villages as well as in the cities, in the schools, in the government, in media, in industry. It will affect the destiny of this nation; it will determine the course of the times.”

Phase 3: STREAMS ACROSS THE CHANNEL

Then I said, “Lord, what about these streams that go on across the Channel into Europe?” and He said,
“That represents people who will rise up in the midst of this people movement, this army of witnesses in Britain, whom I will make My communicators.”
Now I hadn’t used that word very much before in ministry I said, “Lord, what do you mean by communicators?” and He said,“They will not only be people endowed with the gifts of the Holy Spirit, with strong faith, but they will also be people talented in the arts. They will be writers, musicians, singers and actors, and also technicians in television, radio and the mass media. I will call and send them and put them in strategic places. I will bless their natural talents with my Spirit, and they will be good: they will excel. They will be leaders in their fields. I will send them into Europe, where they will meet other people in the media, and through them I will release the word of God very fast in Europe. The result will be another wave of a spiritual awakening, with thousands coming to Christ throughout Europe.”

Well, I got kind of excited after I’d heard all that from the Lord, and I said, “Lord, why are you telling me this? I’m on my way to Hong Kong!” And He said, “Oh, no you’re not: you’re going to stay right here, and I’m going to bring Elmer here.” And I said, ‘ What do you want us to do, Lord?’ And He said, “I want you to nourish the fires that I light.” So I’m not the firelighter. The Lord is the Firelighter!

I’m grateful to Tim Grant for this copy of the vision because I’ve just found the link to it in this blog’s Prophecy Library no longer provides the text. We were pleased to hear Tim speak a fortnight ago at Fleet Baptist Church (associated with Partners In Harvest) as he briefly reviewed the progress of two major prophetic visions for Britain and Europe. First, he referred to the prophecy of two distinct moves of God that Smith-Wigglesworth saw in 1947.

Tim believes we’re well into the time of “Word and Spirit coming together” and are now poised on the threshold of that promised awesome revival in Great Britain. So he went on to tell about the impact of the above tripartite vision on him and of having had lunch with Jean, when she stood up and preached without notes for two and half hours.

She expanded upon its second phase, explaining that the fires were people in whom God had put a hunger for Him and His Holy Spirit’s power. The trans-denominational effect would enrich the Body of Christ and out of which new ministries would be born. The lightning and explosions will happen when God brings empowerment to His people to move out of church and take Him into communities.

Afterwards, I told Tim I was with S-W’s prayer partner in 1997 when he saw the same awesome vision, and Tim shared why Jean’s had such a huge impact upon him.

“Richard, do you remember ‘Bonanza’ with its opening sequence’s map of the Ponderosa catching fire and spreading rapidly across it? That’s what I’d seen happening on a map of Britain and Europe! So, Jean’s vision hit me hard when I read it.” 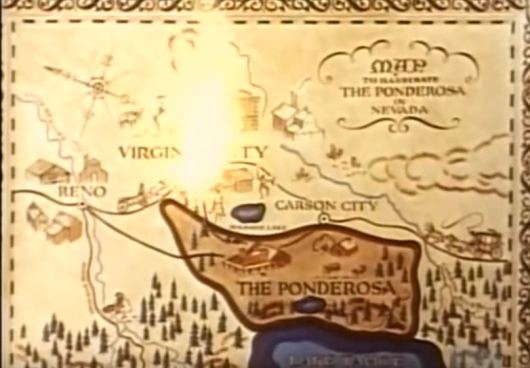 Now, read about the extraordinary ‘God-incidence’ of this in the next post GPS #23 >>