Following our unscheduled but divinely orchestrated intermission that harmonises with material from Dave Hood, we continue to his next theme. For background read A 21-Years’ Series of Progressive Revelations, wherein he says this fits in with his comments upon Veronika West’s prophetic vision/word on the UK’s breaking away from the EU, and the urgent word on the break-up of the EU-bloc and on European nations.

As with all prophecies, this guest post is to be taken before the Lord and weighed:

Britain in its history was once called “Great”, and it was indeed great. It ruled the waves and was once the governing head of the Commonwealth of the Nations. It has since lost its “greatness” and is indeed far from being a “United Kingdom”. But God has plans to make her both Great and United again. In fact, years ago, it spawned a great navy, a vast fleet and flotilla of both merchant and naval shipping in might and power. In years past God used its power to spread the Gospel to the far-reaching corners of the Commonwealth, with some successes. But in some respects it tried to make those far-away inhabitants more like themselves and, as a consequence, the hope fell apart.

God was once with the nation as a “missionary country”. That is not to say that those who venture to preach the Gospel of Jesus Christ are failing today. But rather this country has lost its greatness and unity with God. Its ability to measure truth has been stunted and blunted. It no longer has the cutting-edge and place with God among the nations.

England, Great Britain, I believe was always meant to be in God’s hand as His tool. Like Mark, who in his youth walked with God’s greats … it is my belief; He is once again preparing and calling His ‘Mark’, this ‘nation’ to new fields again … the fields of Europe. In part, the mission field is its own soil, its own country, but first, through God’s inner work and vision for this nation, He is reaching outward to its neighbour, France and Europe beyond, to the outer extent of the vision…

2Timothy 4:11 – ‘Only Luke is with me. Take Mark, and bring him with thee: for he is profitable to me for the ministry.’

God needs to change the heart of a nation, to become a minister TO the nations.

Mark, is as this country, that had and was meant to have a cutting-edge … Its METAL cutting head fell off the shaft and disappeared under muddy waters. But like those who explored and sought for the sunken metal hull of the Titanic…God knew where she lay and in what depths to find her. He has chosen to raise her from the depths of her long sleep…and like the one who sought to find her, who found her deep down…He, God, having found her, said… “I will come back for you, for I have left My Name there”.

Like the Titanic, she, His nation, His church in this country…she was a wreck, deep in the waters, up to her neck in mud and slime. But God found her, just like those explorers who longed to find her…for He had never taken his eyes off her, but was readying her for her future service.

Like Mark he says, “TELL MARK I HAVE NEED OF HIM”. Just like in the film (‘Titanic’), He intends to make the ending all the more real and all the more glorious. He found her and raised, raises her. Like the axe-head, God raised that up by the power of the cross. Because I live, Jesus said, you shall live also.

He wants again to make Britain a maritime nation, only this time to rule by the waves of his Spirit, and UPON HIS TIDE, His waters boundless limits that He sets…But there mighty [is] Jehovah for us, A place of rivers — streams broad of sides, No ship with oars doth go into it, And a mighty ship doth not pass over it. (YLT)

Just as Lord Kitchener proclaimed, “Your country needs you!” and was communicated to the masses in times of war and need so, too, does another Lord’s signal.

Tell My Mark, My people, My nation their Lord hath need of them.

HE HAS NEED OF YOU ALL NOW

For the campaign He has planted, plotted and planned is upon the battlefield of His Europe. For the earth is the Lord’s and everyone and everything in it.

This country is an island, an iceberg island and set for turning. The Titanic was sunk by an iceberg. This ship represented all that was known of the engineering of man. If it had not fell, oh how it would have “lit up” the oceans of the nations. The Titanic as it was, is similar to Europe, its EEC as it and its nations has been engineered by man and spiritual forces in a particular way. It, Europe, believes its strength is in its planning, in its purpose for the future of the peoples of Europe and its developing and strategic role in the World.

I hear Him emphatically say…

“EUROPE AS THE TITANIC, CANNOT WITHSTAND THE ICEBERG THAT IS BRITAIN”. 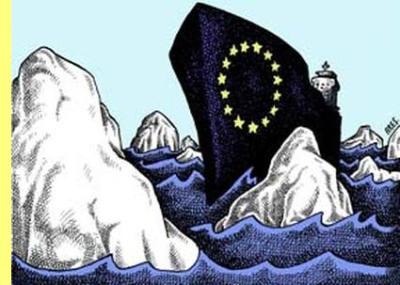 God is loosening its iceberg nation Britain OFF its AGE-LONG ROOTS, OFF ITS moorings. The European Titanic, in its pride and blindness CANNOT or WILL NOT SEE WHAT IS COMING, BUT IS SAILING IMPERIOUSLY TO DISASTER…it is ill-prepared and ill-equipped. It thinks itself INVINCIBLE, even UNSINKABLE. It neither understands the times or its tides.

God is turning the iceberg Britain upside-down and making her to be a force, like the Titanic was meant to be in its time. But under His ensign it will be a humble but great force IN HIM to be reckoned with, to sail the seas and the tides of the Holy Spirit.

She herself, BRITAIN, GOD’S OWN RAISED TITANIC, WILL APPROACH the ICE FIELDS OF FRANCE and EUROPE, but she will remain whole through His might…and THIS, HIS MIGHT, will be dispersed among the nations.

You, we, are His raised Titanic, His axe-head raised by the cross … its purpose to be the bows, the cutting-edge of His intercessory vessel, His ice-breaker… its purpose I hear Him emphatically say … the freedom and salvation of Europe. But He first calls His Mark and awakens us to the call.

These images from a fictional video are offered for inspiration and ‘prophetical action’: 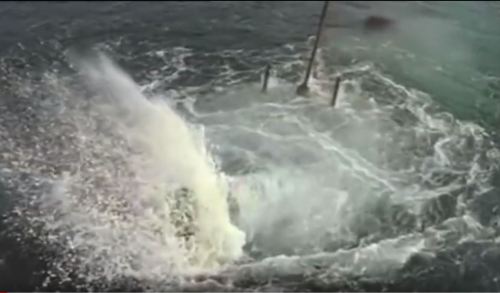