Coming the day after I’d briefly commented upon having heard back in 2009 “This is All about to be fulfilled”, these two dreams recounted by Veronika West are, in my humble opinion, quite exceptional:

“WATCH! HEAVEN’S TIME IS NOW MOVING UPON THE HANDS OF EARTH’S CLOCK” 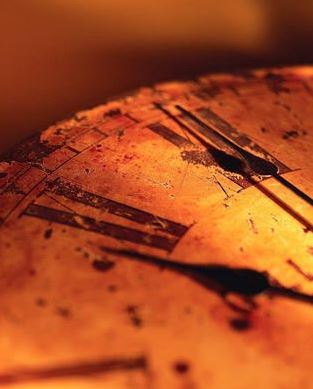 ‘First Dream….Two nights ago I had a very short dream where I saw 12 Wells being unlocked and Mighty Rivers gushed forth from the mouths of these 12 Wells, then I saw 12 different Mantles being released from Heaven and of the 12 mantles that I saw, I only heard 4 being named in my dream, I heard heaven whisper, “Elijah, Esther, Joseph and Jehu”, then I saw 12 baskets over flowing with bread and then 12 Large Pottery Jars full of Wine.

‘Second Dream…I was standing on the axis of the Earth, I could see some of the far off and distant planets of the solar system, it was breathtakingly captivating and beautiful!!

‘As I stood on the axis of the Earth’s surface suddenly a large pole that had many arrows pointing in different directions came out of the ground, as I looked at the arrows I noticed each arrow had the Name of Nation written upon it, and I noticed there was a large clock sitting at the top of the pole, but the Clock seemed to be standing still, but as I continued to watch the clock, suddenly the small second hand began to move very fast, and then the minute hand began to move, and then the hour hand moved. As I watched all three of the hands they began to move very quickly around the face of the large clock, suddenly all three hands stopped at the number 12, Immediately I heard these words,

“THE TIME-PIERCING SWORD IS GOING FORTH TO TURN AND SHIFT THE FACE OF THE NATIONS, FOR HEAVEN’S TIME IS MOVING UPON THE HANDS OF EARTH’S CLOCK, WATCH FOR THE NATIONS OF THE EARTH ARE NOW PERFECTLY ALIGNING WITH HEAVEN’S TIMING”!

‘Then suddenly the arrows on the pole began to move violently around and around, as I watched closely one by one the arrows flew off the pole and each arrow flew into the ground like a stake, I watched as arrow after arrow they penetrated the ground until I saw 12 perfectly lined stakes, I looked again and I could see the 12 Names of Nations now standing in perfect alignment with one another, and I saw the Names of 3 specific Nations, Australia, America and the United Kingdom.

“Stakes became Ancient Gates”
‘THEN SUDDENLY, I saw the stakes in the ground turn and transform into what looked like ancient Gates, now 12 Gates stood before me, each Gate had the Name of a Nation upon it, as I looked at the Gates, I could see 12 Keys. Then suddenly I heard the deep sound of a shofar and out of the heavens came 12 bright lights, I watched closely as one by one the bright lights approached the 12 Gates.

‘Then I heard the words,

“Behold, These are My Twelve Commissioning Apostles and Prophets!”

‘After hearing these words I saw what looked like 12 High Priests wearing crowns upon their heads, each Apostle/High Priest took hold of a key and opened the Ancient Gate and walked through onto the other side.

‘In the dream, I followed closely behind one of the High Priests as he entered through one of the Ancient Gates, and there on the other side of the gate I saw men and woman, some were laying prostrate on their faces, while others were on their knees, they looked like they had been waiting and praying, then I saw the Apostle/High Priest begin to put his hand on their foreheads, he took a small vessel shaped like a horn from under his robe and he began to pour out a golden oil , I watched as he poured the oil over each of those that were kneeling down.

‘Then I heard him say,

“In the Name of Jesus Christ you are Anointed, Appointed and Commissioned as Kings and High Priests carrying all the Authority of Heaven, Now ARISE and Go forth into all the Nations of the Earth and Establish the Kingdom of Heaven!”

‘Firstly, I believe this dream is multi-layered and my deep sensing is that there is still more to come, however we prophesy in part, but here is what I believe Father is showing us for NOW!

‘The number 12 I believe is significant, as it implies structural beginning or governmental perfection and rule. We know that the nation of Israel comprised of twelve tribes, and it represented a physical type of God’s government on earth. There were also twelve apostles that were chosen by Christ to serve as the foundation for His Church, as well as the kingdom of God. Twelve thousand from each tribe of Israel constitute the 144,000 in the Book of Revelation.
Matt. 10:1-7
Luke 22:29-3
Revelation 7 and 14

‘Furthermore I believe prophetically that the Nations of the Earth are now being perfectly Aligned with Heaven’s Time, I submit we have entered into a Time in History where we are going to see the greatest of Shifting, Sifting and Shaking among the Nations of the Earth. There is a divine reordering and rearrangement that taking place among the Nations, the government of Heaven is being established on earth, I also believe there is a coming a powerful ‘Commissioning Anointing’ that is going to be released to those that have been Waiting and Expectant, and also to those that have hearts that are Open, Ready and Seeking for His Will and His Kingdom purposes to be Established on the earth.

‘I submit the Compass of Heaven is now directing and re-routing the Sons and Daughters of God in this hour, for they will Walk in God’s Perfect Timing and in the Spirit of Unity they will be of one Vision and one purpose, they will be Radical in their Obedience and Sacrifice, this is the Rising Remnant of Radical Reformers, “Called for Such a Time as This”!

‘I prophesy: THIS IS A TIME OF DIVINE RE-ORDERING AND RE-ARRANGEMENT FOR KINGDOM ALIGNMENT, HEAVEN’S RULE AND GOVERNMENT IS BEING ESTABLISHED UPON THE EARTH, AND AS GOD’S LEGISLATORS WE ARE BEING SUPERNATURALLY SENSITISED TO HEAVEN’S TIMING AND HEAVEN’S AGENDA, I PROPHECY IN THIS SEASON GOD IS RESETTING AND RE-CALIBRATING THE INNER WORKINGS OF OUR SPIRITS AND OUR HEARTS ARE BEING PERFECTLY SYNCHRONISED WITH THE HEART-BEAT OF GOD FOR THE NATIONS.’