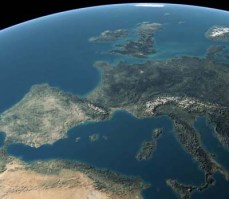 With this year’s huge increase in persecution and atrocities committed by Muslims against Christians, I’d often wondered if my dramatic dream about the fall of Islam that stunned me in early 1992 would actually materialise. But I thought the violence would defeat its purpose because ordinary, moderate Muslims should be disgusted and appalled by what’s being done in the name of their religion. Also, because it all portrays the reality of its founder’s purpose.

Thus, its adherents would become so disillusioned they would seek radical change, as  happened for Communism (which was my understanding of the dream). So I concluded it may happen sometime soon. I now learn that’s indeed happening, as recounted in the following Comments Paper from Dr Clifford Hill.

Dr Hill also authenticates some of the content of the prophetic words brought in the last few weeks by Cindy Jacobs and Heidi Baker, namely:

“United Kingdom, red, yellow, brown, black and white, dancing upon injustice, releasing the Glory of God to the streets. God has brought the Nigerians and the people from West Indies, …some people say the complexion of the nation has changed”, but the Lord says, “I have caused it to be the colour I have always wanted it to be in my people coming together as one, for love has no colour says the Lord”. (Cindy Jacobs)

“…the other faiths, the other religions, they’re going to take notice when the Christians come together in radical love – a cross-stream, they won’t care what they’re called, they won’t care…” (Heidi Baker)

On Advent Sunday this year M and I had the great joy of going back to the East End of London. We were speaking at the morning service of a Church just a few hundred yards from the street where we lived and raised our three children back in the 1970s. But how different it is today from the time we lived there! There are very few local white people in the area around our old house and more than half of those who live there now are Asian Muslims.

Looking Back
We were glad to see that the congregation approaching some 200 in the church reflects the local population among whom there were no more than about 10 or 12 local white people. They represented every region of the world with the worship leaders being a mixture of African, Caribbean and Asian. When we lived there we saw the first handful of Asians arrive and now they are in the majority and their culture dominates the High Street. We remembered appointing the first member of our team to take responsibility for work among the Asians and we used to say that the ‘Overseas Mission Field’ had become the ‘Home Mission Field’.

Embracing Change
We had a vision in those days of Christians not only welcoming the newcomers but sharing their faith and leading them to know Jesus as Lord and Saviour. Of course, we had no idea that the number of incomers would be so large and so rapid that in 40 years it would be hard to find a local white family living in our neighbourhood. But the church where we were speaking has not only survived the changing population, but embraced it by becoming a fully multi-ethnic congregation. They have committed Christians in each of the ethnic groups who are evangelising among their own people.

Who Are True Muslims?
Throughout the past year we have been speaking at meetings all over the country with a basic message about the great shaking of the nations that is now taking place. The message we took to Newham was that God is now shaking Islam. The shaking began with the Arab Spring in Egypt and other countries of North Africa and the Middle East. But the rise of the Islamic State in Syria and Northern Iraq has produced a level of atrocities that has shocked the civilised world and rocked the confidence of Islamic leaders and millions of ordinary Muslims. It is the claim of the ISIS fighters to be the true followers of Muhammad in pursuing their policy of violent conquest and coercion that has shaken ordinary Muslims who think that Islam is a religion of peace.

Visions of Jesus
Advent is the season of light and life and liberation. The message that God is turning the light upon Islam was received with great joy. We related reports of hundreds of Muslims in Egypt and many other countries having revelations of Jesus at the same time as they hear terrible reports of atrocities from the Islamic State which are causing them to question the spirit behind Islam.

Muslim Harvest
Many of the church were able to confirm that their friends and neighbours in East London are beginning to question their faith and are open to Christians telling them about Jesus. A number in the congregation used to be Muslims before giving their lives to Christ. Together we rejoiced that the ‘Muslim Harvest’ has begun and the church was making preparations for using the Christmas season to reach out to the Muslim population to tell them the true story of Jesus coming into the world to reconcile sinful human beings to God our Loving Father. For the Christians in East London Christmas has become the season of Harvest – Harvest for the Kingdom!