Veronika posted the following last Friday for which I’ve appended remarks about its first part being clearly implicit in ‘alternative’ press research and latest news. This version is by courtesy of His Kingdom Prophecy:

A strange dream about two Dolls: ”One made in China… The other, hand-made for America!”

So, once again some who read this will think I’m crazy, but God often speaks in strange and mysterious ways to me.

I think it’s because I have a tendency to be a pretty serious and often rather an intense person, so God knows just how to break through those aspects of my character — to speak a clear and concise Word to me. Isn’t He amazing!

So I want to share a short but really strange dream with you all, where I found myself standing in what looked like a large industrial Factory, and what stood before me in the dream were a large number of huge big bags of what looked like weird plastic Dolls dressed in black and white clothes.

But, from where I was standing in the dream, I was not able to see the Dolls very clearly, so I stepped a little closer, and as I got up to these huge big bags of strange looking Dolls, I was shocked to see that they were in fact Dolls that looked like Joe Biden!

They were strange looking action-type figures of Joe Biden, dressed in black and white tuxedos.

Now as I looked and looked again at my surroundings, I realised that I was standing in a Factory that was making and mass producing these plastic action figures of Joe Biden, and as I stepped even closer to the bags, I reached out to touch one of the Dolls, and before I could touch it, I saw a ticket on the back of the ‘JB Action Figure‘ that said, ”MADE IN CHINA,” and suddenly, as I read those words, I heard these words, ”What’s made in China is cheap, and will not last. But what’s hand-made for America will stand the test of time!”

(Yes… you can call me crazy… but that’s what I heard!)

Now as I heard those words in the dream, suddenly I saw all the actions-figures of Joe Biden being thrown into what looked like a large black storage bin, and on the side of the big black bin was a sign which read “TERTIARY RECYCLING”.

Then I heard these words, ”Watch! For what the enemy created for evil. I will Turn, Transform and Reform for good and for the advancement of My Kingdom!”

As I heard those Words, suddenly the dream shifted and I found myself standing in what looked like a small Repair Shop, and I could smell a strong fragrance of Linseed Oil in the air, and I could hear the sound of tinkering in the background.

As I looked up I saw a sign that read, ”Restoration and Repair; The Potters Emporium” and as I looked at that sign, I heard these words, ”Watch! For the Oil of My Glory will flow forth upon this land to bring Divine Restoration and Supernatural Repair to that which has been stolen and broken!”

The Doll had auburn hair, and was dressed in a dark blue suit with a red and white satin tie around its neck.

But as I looked a little closer at the Porcelain Doll of President Trump, I saw that the Doll’s white porcelain face was badly marked — like a child had scribbled on its face with a black highlighter pen.

Its auburn hair was sparse and had been ripped out in places, the hands and the fingers of the doll had small cracks in them, and the clothes on the doll looked worn, faded and shabby.

There were a few small holes in the legs of the trousers, and I noticed in the dream, that the Presidential Doll was missing a shoe on its right foot. I also saw that a big piece of the right foot was broken off.

I could see that the Doll had obviously been well played with, but it had not been taken good care of, and was now in desperate need of restoration and repair.

Now as this strange dream continued to unfold before me, suddenly I noticed what looked like a Maker’s Mark stamped on the underside of what was left of the right foot where the Doll’s shoe was also missing and it read, ”1946/ HAND-MADE MADE FOR AMERICA”

As I read those words, what immediately jumped out at me in the dream was the word “FOR” and so I re-read the Maker’s Mark again and it read, ”1946/ HAND-MADE MADE FOR AMERICA”.

As I read those words again, I heard The Spirit say, ”Watch! For what is made by the hands of man will not stand, but what is made by The Hand of The Father will never fall or fail!”

As I heard those words, suddenly the dream shifted and I saw The Hand of The Potter of the Emporium take a hold of the old Vintage Porcelain Doll, and I watched as he began to carefully and gently remove the old and tattered clothes from the Presidential Doll, and the worn clothes were tossed aside.

Then suddenly, I saw The Potter doing a strange thing. I watched as he spat onto the marked face of the Doll and then he took a soft cloth and began to wipe away the black marks that had completely covered the expression on the Doll’s face.

As he did this, suddenly I saw that the face of the doll being completely washed clean, and a big a bright smiling expression could be seen once again on the Doll’s face.

Then, I watched as The Potter went to work on the small cracks in the hands and the fingers of the Doll, and a small bottle of Oil was brought out and put onto the wooden work bench.

Again I saw The Potter doing a strange thing. I watched as seven times, the broken foot of the Doll was lifted out of the water, and then again submerged under the water. On the seventh time, I saw that the right foot of the doll had been completely repaired and fully restored….

Then I saw The Potters eyes look up, and his attention turned to the head of the Presidential Doll which was missing a lot of hair.

Suddenly I heard these Words, ”Watch! For what has been deliberately uprooted and torn down shall now surely be planted and rebuilt!

Watch — for that which suddenly departed shall be returned, and My Glory shall once again crown the heads of the righteous!”

As I heard those Words, I saw the fingers of The Potter touching the hair on the head of the Presidential Doll and I saw a tear falling from his face as if he knew every fibre of hair that been lost or removed.

Now, as I continued to watch this strange thing unfolding in the dream, again the dream seemed to shift slightly and I saw The Potter do something very strange.

As he looked at the Doll — which was now almost fully repaired and restored — I saw that the old Vintage Doll still had no clothes, and I watched as The Potter began to sing over the Doll, a song with a melody that i have never heard before — a song that had a sound that is impossible to describe.

But all I knew, was that as I listened to the song and the sound being released, was that it was a Love Song… a song so incredibly beautiful that it caused me to begin to weep in the dream.

As I remained watching and listening in the dream, suddenly I saw what looked like a multi-coloured rainbow type of garment, beginning to swirl roundabout the Presidential Doll…

I saw that where the Presidential Doll had been stripped of its old and worn clothes, it was now being fully Recovered and Re-clothed in new Presidential Garments…

And, as I watched this unfolding before me in the dream, I saw a great transformation taking place, and it seemed like in the twinkling of an eye, thick auburn hair now crowned its head, a new deep royal blue suit covered its body, and a beautiful red and white satin tie appeared around its neck, and a new pair of shoes was now upon its fully restored feet.

Now, as I looked and looked again in the dream at the now fully restored and repaired porcelain Presidential Doll, suddenly I heard these Words, ”Yet you, LORD, are our Father. We are the clay, You are The Potter; we are all the work of your hand…”

As that verse echoed loudly in The Realm of The Spirit in the dream, I suddenly woke up and immediately began to pray and write down all I had just seen and heard in the dream.

In the coming days I will endeavour to outline clearly some of the prophetic symbolism I have received with regards to this strange dream and how I believe it speaks to what God is doing at this time in the Nation of America!

I’m sure Veronika is unaware of finer details of political life over in the States and so I commented on her Fbk, “It’s not for nothing that for a long time JB’s nickname is ‘China Joe’ and leading non-MSM sites have many accounts of his serving China’s purposes. So he truly is their ‘doll’!”

Many examples of in-depth investigate journalism on the Biden family’s links with China can be found in The Epoch Times’ China Watch and in The National Pulse – eg below: 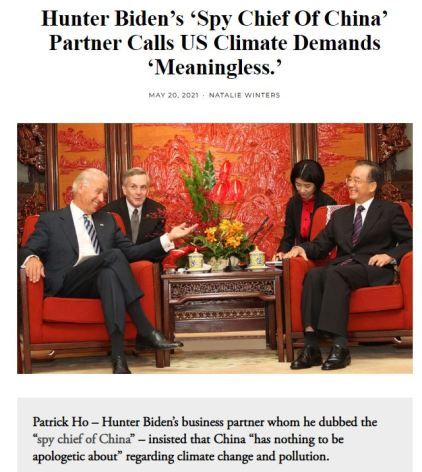 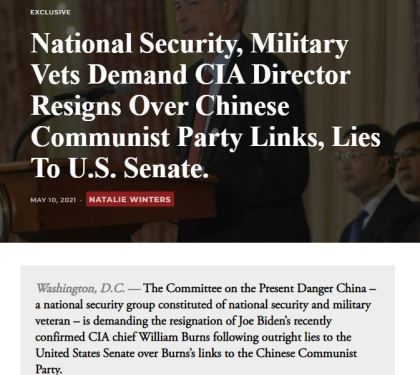 And please note the latest in The Gateway Pundit: 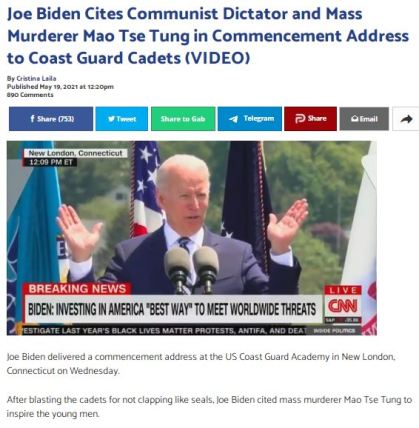 This reads, ‘Joe Biden delivered a commencement address at the US Coast Guard Academy in New London, Connecticut on Wednesday. After blasting the cadets for not clapping like seals, Joe Biden cited mass murderer Mao Tse Tung to inspire the young men. Mao Tse Tung, a Communist dictator, murdered up to 70 to 80 million Chinese last century, according to most accounts.

‘Biden bragged about promoting women to leadership roles in the US military when he dropped his favorite quote from Mao ‘women hold up half the sky.’