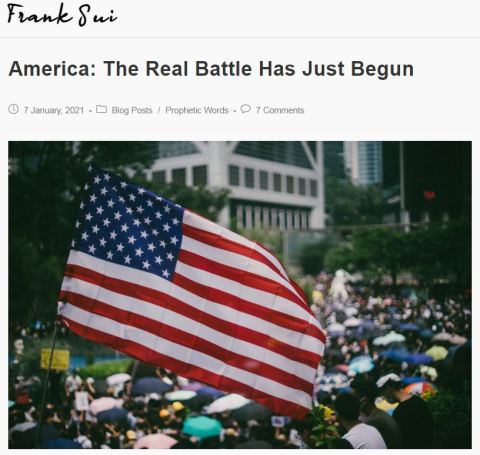 I was blessed to see an advance copy of Frank Sui’s prophetic paper: America: The Real Battle Has Just Begun) and you may wish to read it first on order to appreciate his following remarks posted on his Facebook:

Hey Friends, Two weeks ago I shared my Trump prophecy and said I would stand on it until Inauguration Day.  However, after much prayer I have decided that, whatever happens tomorrow, I must continue to stand. For several reasons:

1. When I saw the civil war in the spirit on Nov. 19th, I also saw a time of “2 presidents” as a result of neither candidate conceding. I did not prophesy this because I didn’t know if it was literal or symbolic. I also hadn’t heard of anyone else who prophesied similarly at that point. But since then I have heard 3 prophets prophesying exactly the same – Kim Clement who died in 2016 (his daughter dug out the clip and played it on their Prophetic Rewind show – Richard’s Watch refers), Robin Bullock and Manuel Johnson. The latter two prophesied independently of “2 presidents and 2 inaugurations” and it would be likened to the two altars at Elijah’s showdown. Just now I’ve talked to a prophetic intercessor here in Aberdeen who said something similar. No-one knows how exactly it’ll play out, but with all of this, I feel that I must let it play out.
(If you haven’t read America: The Real Battle Has Just Begun yet, have a read and you’ll see why it doesn’t make sense not to continue standing now.

2. God is not bound by man’s timing. One of the easiest mistakes prophetic people can make is putting God in a timeframe and “giving God a deadline” when He is in no obligation to keep it whatsoever. Jonah had something similar. “In 40 days Nineveh will be overthrown” – Nineveh ‘was’ overthrown eventually, but not in 40 days. Nowhere in the book did the Lord give Jonah this time-frame – maybe it’s just vagueness in the way the story was recorded. But heck, Jonah didn’t even give a disclaimer saying “if you repent, it won’t happen.” He simply said “40 days”, and it didn’t come to pass.

I remember, in 2012 the Lord spoke to me about something really significant related to the coming revival, and said He would confirm it with a literal storm “at the end of the year” – but that “end of year” didn’t come until 3 years later, on Dec 30, 2015 when I had almost forgotten about it, and He had to remind me of it. And just so I was absolutely sure, it was called “Storm Frank.” – I’ve learned since then when God says “at the end of the year”, ask Him “at the end of WHICH year?” [RB: And that nomenclature shows the Lord has a sense of humour!]
(And no, I am NOT suggesting Trump running again in 2024. That would classify as a “rubber band prophecy” – stretch to make it fit.)

In my case, God never gave me a time. My standing on it “until Inauguration Day” was simply what “I” had decided to do. And I have to say, while we need prophetic integrity more than ever, my promising to apologise after Inauguration Day was not done out of integrity, but caving into pressure, jumping on the noble train and saving my own reputation (which I was not aware of). The Lord’s dealt with me ever so gently over the last 2 weeks and I had to repent. So much stress was gone as a result of it, knowing my faith is in Him, not in a particular way of outcome. I have more faith now than ever that whatever happens, when it’s all said and done, Trump will be sitting in the White House as a transformed man. We are at a Red Sea moment, and we don’t need to know when, we just need to know one thing: GOD.

3. For moral reasons. The prophetic aside, Trump won the election by a landslide. The evidence is out there. Anyone who’s taken the time to hear even a fraction of the affidavits filed will have no doubt that major fraud took place and the election was stolen. It’s just that none of the courts wanted to hear the evidence – not because they weren’t valid. But as believers we have a higher Court to appeal to. Anyone who cares about justice must pray for it to be served, regardless of where you stand prophetically re: Trump. Luke 18 made it clear that justice will come, and it will come “speedily” when His elect cry out day and night, but the question is when He does come, will He still find faith (agreement).

So, yeah! I apologise for promising to apologise but didn’t manage to apologise in the end – sorry to say! But grab your popcorn for tomorrow’s fake coronation. It will mean absolutely nothing to God, but it will be great entertainment. 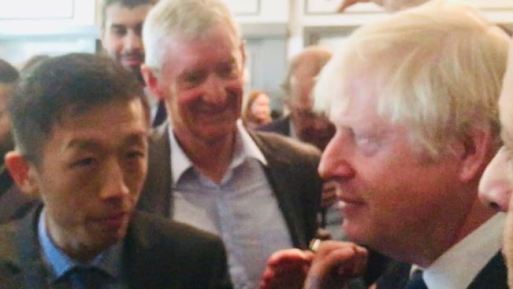 I totally agree with Frank; no apology necessary!  It’s not yet over, by a long chalk.

6 thoughts on “America: the real battle has just begun – Frank Sui reflects upon his prophecy on Donald Trump”