This from Veronika West posted last night is very pertinent in the light of the increasing likelihood of Theresa May’s betrayal of the peoples’ democratic decision to leave the EU. (NB. the latest ‘deal’ has been leaked to Irish papers instead of to British press. Rt Hon Jacob Rees-Mogg writes, “Words have consequences. As Saint Matthew wrote: ‘every idle word that men shall speak, they shall give account thereof in the day of judgment’…” – Brexit has become an issue of trust and the government has lost it!)

AN URGENT WORD OF WARNING TO THE WEARY WARRIORS OF USA AND THE UK; I SEE BROKEN ARROWS IN THE HAND OF A MIGHTY WARRIOR, THE ENEMIES OF GOD ARE BEING SCATTERED..! 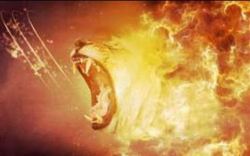 Today while in prayer for both Nations, I was taken into a very powerful vision where I saw many WEARY WARRIORS ON THE BATTLE FIELD, many were EXHAUSTED AND HAD BEGUN TO SHRINK BACK AND RETREAT, the Enemy SEEMED TO BE GAINING GROUND, the enemy SEEMED TO BE WINNING, but then SUDDENLY a LOUD ROAR came out of the heavens and the atmosphere of DEATH AND DESTRUCTION on the battlefield began to SUDDENLY SHIFT AND CHANGE. Then I heard these words,

As I heard those words, I felt a tangible SPIRITUAL SHIFT BEGIN TO TAKE PLACE OVER BOTH NATIONS, then I saw the Weary Warriors on the Battlefield begin to ARISE TO THEIR FEET IN GREATER STRENGTH AND POWER AND THEY TOOK THEIR ARROWS AND BEGAN TO BEAT THEM HARD AGAINST THE GROUND, NOT ONCE, NOT TWICE, NOT THREE TIMES, NOT FOUR TIMES BUT FIVE AND SIX TIMES THEY BEAT THEIR ARROWS HARD UPON THE GROUND UNTIL ALL THE ARROWS WERE BROKEN!!!!

Now As I watched this unfold in the vision suddenly the Spirit of God quickened to me (2 KINGS 13:17-19 which says, “Open the east window,” he said, and he opened it. “Shoot!” Elisha said, and he shot. “The LORD’s arrow of victory, the arrow of victory over Aram!” Elisha declared. “You will completely destroy the Arameans at Aphek.” Then he said, “Take the arrows,” and the king took them. Elisha told him, “Strike the ground.” He struck it three times and stopped. The man of God was angry with him and said, “You should have struck the ground five or six times; then you would have defeated Aram and completely destroyed it. But now you will defeat it only three times.”

ITS A TIME OF INTENSE WAR; THE WARRIORS OF GOD MUST ARISE ADVANCE AND TAKE GROUND.

LISTEN; IT’S TIME TO SHAKE OFF THE SPIRIT OF WEARINESS AND PASSIVITY THAT COMES TO CAUSE YOU TO SHRINK BACK AND RETREAT, IT’S TIME TO STRIKE OUR ARROWS HARD UPON THE GROUND AND WATCH AS OUR ENEMIES ARE UTTERLY DESTROYED….!

PS. Veronika explains on her Fb:  “OUR PRAYERS ARE THE ARROWS; this word is about PRESSING IN THROUGH PRAYER WITH A GREATER LEVEL OF INTENSITY TAKING OUR STAND PROPHETICALLY RISING UP IN GREATER AUTHORITY AND ANOINTING AS KINGS AND HIGH PRIESTS.” 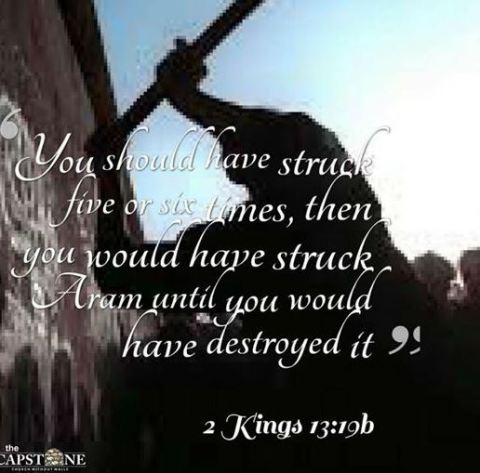 2 thoughts on “URGENT word of warning to intercessors (Brexit betrayal)”