Thank you to Discerning the Times for bringing the following news to my attention. It’s really not the ‘Surprise’ they bill it as!

It is significant news in view of rabbi Kaduri’s prophecy of Messiah being revealed to Israel after Ariel Sharon’s death. (After a massive stroke in January 2006 he was left in a comatose state until passing away last January.) This prominent rabbi is reputed to have met the Messiah and hidden a note of his identity, as reported on this blog in Who are the Jewish people expecting…?

This piece therefore acts as a suitable follow-up to The rabbi’s note, the PM’s death and the angel’s word – Part 1, the second part of which I was unable to complete in view of higher priority material. Its opening section was headed ‘A Matter of Time’, and so perhaps that blog’s Part 2 was awaiting this news?

Put the breakdown of Israel’s ruling coalition into perspective. Forget their flap over proposals to define Israel officially as a ‘Jewish state’ – here’s the only solution for cessation of the current conflict… 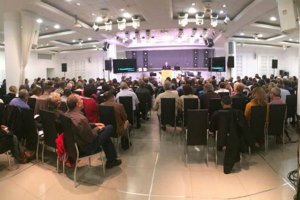 A new generation of Arab and Jewish followers of Jesus met together last week to strategize on how to “turn Israel upside down.”

Two hundred and sixty Messianic Jewish and Arab pastors, youth leaders, evangelists, Bible-school teachers and ministry leaders gathered for a three-day council to discuss, study, pray and work together to effectively bring the word of God in power to Arabs and Jews throughout the whole Land of Israel.

These seasoned men and women of faith embody decades of labor proclaiming the Gospel to local Arabs and Jews. Most have given up everything to preach Messiah to their unbelieving Muslim and Jewish families and friends. Despised because of their faith, they have lost jobs, suffered rejection and endured multiple other hardships, yet their passion to bring the Good News to their people remains unquenched.

“We will keep preaching and teaching the Word of God until it changes the people of Israel,” declared one leading pastor. “We must be willing to suffer for the sake of the gospel and keep going no matter what happens. God will accomplish His will through the power of His word.”

With tensions now raging in Jerusalem and across Israel, it was astonishing to witness firsthand the deep friendships between these Arabs and Jews. Even the cold-blooded murders in a Jerusalem synagogue that took place on the final day of the gathering could not separate these godly men and women from their warm fellowship in Messiah.

In fact, the cowardly acts of terror and violence still raging in Jerusalem only served to move them to stand even stronger together and compelled them to more boldly declare the life-giving Word of God to both Muslim and Jew.

A regular theme throughout the gathering was the need to understand God’s prophetic word concerning the Last Days. (Emphasis added RB)

Scriptures related to the Second Coming of Messiah were studied. There are many signs that we are living in the latter days, particularly the return of the Jewish people to their biblical land, and the leadership of the local congregations in Israel discussed the need to prepare God’s people for the Messiah’s soon return.

All agreed that time is short, and the peoples of this land, both Arab and Jew, must hear the Word of God now.

It was mentioned that some local leaders are not teaching or preaching about the Second Coming. They do not want to stir up controversy or division over what can be a difficult subject.

While there remains much debate in Christianity and among Messianic Jews as to what exactly will happen around the Second Coming of the Lord, all were in agreement that He is coming, and that the Gospel much be preached in boldness, especially in Israel, before it is too late, for He comes this time in glory and in judgment.

According to many New Testament scriptures, the return of Messiah should unify believers, inspiring them to ready themselves in purity and holiness. It is seen as a cunning ploy of the enemy to cause so much confusion and division concerning the Last Days and Messiah’s return.

The leadership of the local Arab and Jewish congregations in Israel prayed for unity of faith in the Messiah’s return and boldness to tell others of His coming Messianic kingdom, the only real solution to the Arab-Israeli conflict and the peace of Jerusalem.

Amen and amen to all those prayers!