TWO YEARS AGO this morning I did something rather rare… 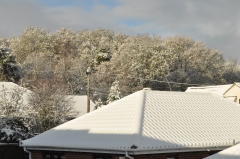 It was unlike today when, upon opening our bedroom curtains, I was greeted by the sight of a light dusting of snow. A little later, as I brought two cuppas upstairs, the window displayed hundreds of tiny flakes zipping horizontally across the window. It was like watching a video of traffic on a city’s roads – hundreds of tiny lights heading mainly in one direction but a few dozen others taking turns, and not only going vertically one way or the other but also some would U-turn against the main flow!  It’s all caused by a very chilly easterly from north Scandinavia charging across the garden and gusting over our roof and walls.

Two years ago I looked through an electronic window. After getting up and heading to the kitchen I put the TV on to hear the hourly news – but got no further!  There was no newsreader. Whatever was onscreen?  It looked like treacle spreading over fields!

As part of the headlines, the BBC was showing footage from a helicopter of agricultural land and roads being swamped by black water two hours before I awoke. It was early footage of the tsunami that had been caused by Japan’s 4th most powerful earthquake . It became known as ‘tsunami soup’ in its feafully dread and vile nature.

Why should that terribly tragic event have once again been thrust into my mind, not just today but a week ago?  At the end of February I’d been ruminating over the increasingly dreadful degradation within society globally.  Many have deliberately turned against the divinely inspired injunctions for living a Godly life, refusing to acknowledge sinfulness in their lives, they intimate that God is either non-existent or else a liar.  Millions use a god as a brain-dead excuse to hate and kill anyone who believes differently.

So my thoughts had turned to consider how the Lord is taking all these developments. Isn’t it time for Him to show up or display His sovereignty and majesty? Will He?  When will He…for His Holy Name’s sake?

On Saturday morning, 2nd March, in Windsor such notions were not uppermost in my mind – especially during prolonged and elevating worship preceding a Mentoring Day. As this time came to a gently subdued close a few impressions came into mind… 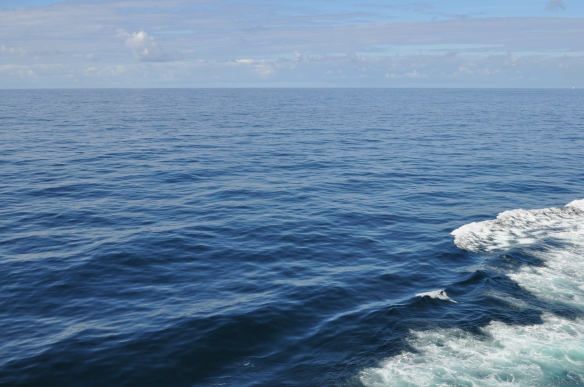 A seascape similar to this of the Bay of Biscay popped unbidden into my mind’s eye and brought a train of thoughts, which I noted as follows.:

‘As the worship quietened came an impression of a calm sea but with a slowly swelling surface on the horizon, completely left to right across the whole horizon, getting taller and darker. His (God’s) tsunami is coming!

(I recalled the video of the first signs of the Japanese tsunami where whole beaches got drained completely of water as the tide got sucked out to sea, way past low-tide mark.)

‘Just as ordinary sea withdraws from a beach and leaves a huge expanse exposed and ‘drying out’, so we will dry out nationally and wonder why things changed so radically, as is happening now.

‘BUT a massive all encompassing huge, powerful tidal wave of God is coming and will sweep every thing before it and much of what existed will get wrecked. Only that which is of the ‘wave’ survives and it reaches places the ‘water’ has never before covered!’

Whilst I quickly scribbled this the first session of the day started and I missed Sharon introducing the speaker. But in opening, Tomi took us back into worshiping God. In fact, his most excited message referred to the death of Lazarus and the details of when and how Jesus brought his dear friend back to life. My note continues.:

‘(Tobi) related it to above (notes) in Jesus’ demonstration of a ‘new opinion’ about God. He is doing a new thing, or new ways (WAVE? did he say?) that God wants to reveal.‘

After coffee break, Sharon spoke about what the Lord had revealed within the last few days after her return to the UK.  She is struck with the great importance for ‘watchers to become ‘sentinels’ who challenge the enemy and spiritual goings on!

Upon finding the enemy is making things calamitous here, she sought the Lord on this and reported,

The Lord has allowed the enemy to rally and says, “I’m waiting to see who runs and who stands, challenges, pursues and overtakes”.

It’s so interesting and encouraging that both speakers confirmed and reinforced what I’d written. Of course there was heaps more from dear Sharon.:

She reminded us the closing verses in chapter 2 of Ephesians describe the purpose of God’s work within each of us:

Now, therefore, you are no longer strangers and foreigners, but fellow citizens with the saints and members of the household of God,  20 having been built on the foundation of the apostles and prophets, Jesus Christ Himself being the chief cornerstone, 21 in whom the whole building, being fitted together, grows into a holy temple in the Lord, 22 in whom you also are being built together for a dwelling place of God in the Spirit. [Why ‘therefore? See Ephesians 2.]

Sharon went on to say,

We’re coming (as the Bride) into corporate maturity so that God’s able to release another measure of the fullness of Christ.

She then taught upon rites of passage for the Bride:

God wants us to be seen as mature in/by the world.

Consequently, Sharon had much to teach about our John 15:15 ‘crossing over’ into revelation:

A merging and ‘marriage’ of areas in Christianity that have been separated is thus to be expected. Love for one another brings pure, more wholesome revelation.

Acts 4 describes what happens when others will see the Bride in our new state, where we personally demonstrate Jesus so that people will notice and start responding:

13 Now when they saw the boldness of Peter and John, and perceived that they were uneducated and untrained men, they marveled. And they realized that they had been with Jesus. 14 And seeing the man who had been healed standing with them, they could say nothing against it….18So they called them and commanded them not to speak at all nor teach in the name of Jesus. 19 But Peter and John answered and said to them, “Whether it is right in the sight of God to listen to you more than to God, you judge. 20 For we cannot but speak the things which we have seen and heard.” 21 So when they had further threatened them, they let them go, finding no way of punishing them, because of the people, since they all glorified God for what had been done.

Thank you Tomi and Sharon for hearing from the Lord and answering my concerns.

On top of all that, I was blessed to received personal prophetic words from Simon, the worship leader. There was also an unusual activation exercise wherein a small group would follow one another in hearing from the Holy Spirit to bring a completely connected word for one person but from individuals.  This validated the confirmation received from  Tobie’s teaching of what I’d sensed of a particular warrior presence during worship!

The above can be but snippets from a highly inspirational day of teaching. Other than comments on this blog, any enquiries should be addressed to CIEurope.

6 thoughts on “What’s God up to? Dr Sharon Stone answers my concerns.”