I got a Fbk alert to having published a supposedly partly false report within my re-post of Veronika’s recent item, as shown at the foot of this screenshot:

Being an open-minded born-again Christian I took at look via the link provided; here’s a snippet:

They attempt to provide an impartial report but which is clearly contemptuous of both  investigators for the simple fact they’re at the opposite end of the political spectrum and able to think for themselves. I don’t necessarily agree their conclusions because of the  difficulty in proving their claim as the deposited voting documents cannot be examined.

Also, why whinge about the hype – after all, that’s the typical American way of tending to be over-the-top, as compared with our relatively calmer British way.

There may well be holes in the D’Souza and Englebrecht’s claims but for a better, more balanced view read Is ‘2000 Mules’ An Absolute Game Changer?  by Nick Moseder on Substack. 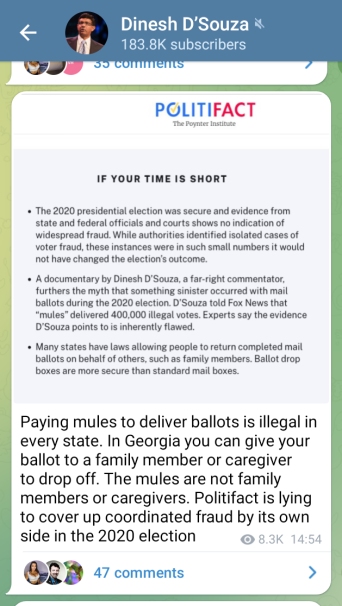 PPS 7 May – Dan Bongino’s reaction after watching the movie: