DO  AMERICANS  REALLY  WANT  SUCH  A  SHAMELESS  LEADER?

Regrettably examples follow of how far America has fallen, as in Veronika West’s highly detailed vision of a mighty oak tree as USA’s divine destiny being destroyed by demonic entities and their servants, witting or unwitting, only to be left as a stump’; but which began with hearing Father tell her, “The stump of Trump will sprout again!” and later warning against all political idolatry as only He is to be prime focus, all as told in this video (from 43 mins):

Kaylee White writes (all emphases mine)

‘Despite the Supreme Court’s explicit warning that any executive extension of the federal eviction moratorium would be struck down, the Centers for Disease Control and Prevention decided this week to implement a new moratorium anyway for two months. When asked about the legal obstacles this policy would inevitably run into, President Joe Biden admitted that what his administration is doing is illegal, but he said he doesn’t care….

‘Imagine, for a moment, if the Supreme Court had told former President Donald Trump that he could not use military funds to build the southern border wall without congressional approval. (In reality, it allowed the construction to continue in a 5-4 ruling last summer.) And imagine if Trump responded by tweeting that he was just going to build the wall anyway. The uproar from Democrats and the liberal media would have been immediate. They would have slammed his executive overreach as a hopeful dictatorship, and they would have been right to do so. The president cannot rule as he pleases. He is necessarily checked by Congress and the courts, and when one branch of government has very clearly forbidden him from overstepping the bounds of his authority, he has a constitutional duty to listen…’ 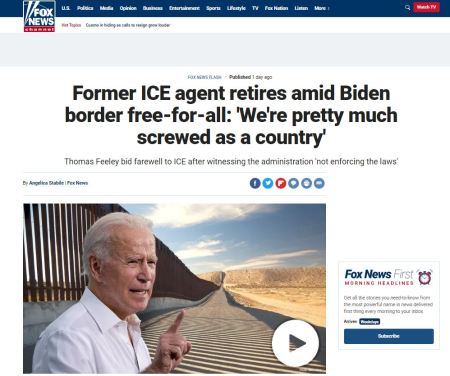 ‘Recently retired senior Immigration and Customs Enforcement official Thomas Feeley left the agency after being fed up with the Biden administration’s border policies endangering national security. The former director of New York ICE removals told “Tucker Carlson Tonight” on Tuesday that the crisis on the “wide open” southern border has gotten “so bad” that immigrants crossing over are being processed over the phone after entering the U.S.

“There’s a fine line between telling people we’re not breaking the law and not enforcing it,” he said. Feeley bid farewell to ICE last week, signing off with an email in which he explained why after 30 years, “it’s time to move on.”

“With the current administration doing everything they can to cripple ERO [Enforcement and Removal Operations], endangering the American public, and not enforcing the laws passed by Congress, I don’t want to be part of that,” he wrote. ‘

Read in full at Retired-ICE-agent-biden-border.

Plenty of developments on investigations by means of forensic audits into November’s nationwide presidential election, as covered in over 200 posts on this blog. 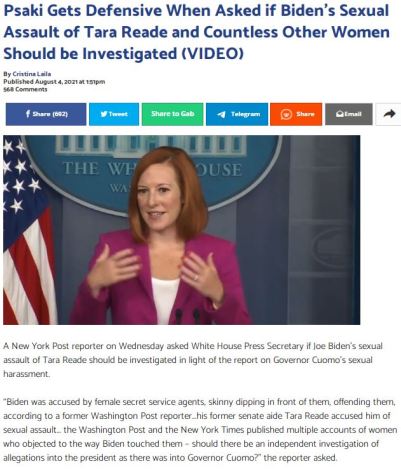 These are not shown as they involve ‘creepy’ Biden’s observed predilection of fondling young girls and boys!! (Go to The Gateway Pundit for latest.)

DO AMERICANS REALLY WANT SUCH AN UTTERLY SHAMELESS LEADER??