NB: This is a long-read!
Whilst preparing yesterday’s blogs on the US Elections prophecies received by Abel Praise followed by screen-shots for Updates 9 and 10, I was corresponding with my dear friend Chris Moyler on background information. BUT then I got BLOCKED once again by social media’s thought policing, as shown below [other examples here]. 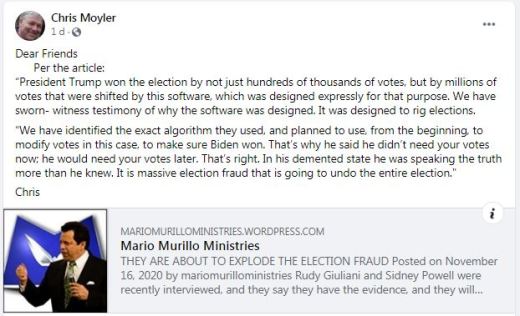 Mario Murillo’s article featured in my Update 10 but click may be read here. After my making a comment with link to source information, these screens appeared as I hit the relevant buttons: 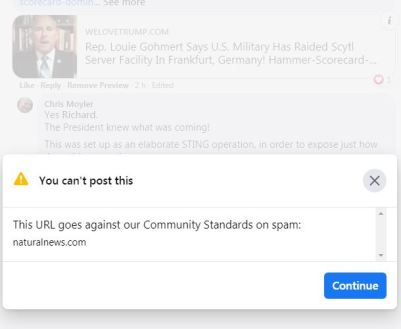 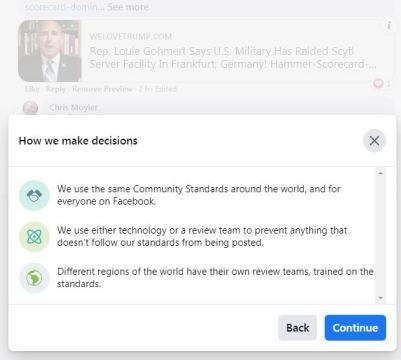 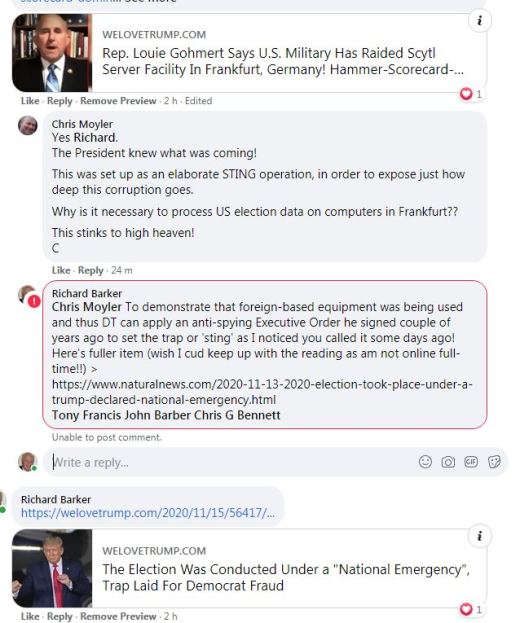 NOW here’s the Natural News piece published on Friday 13th I’m referring to which FB deliberately suppressed (because it targets them):

It’s absolutely no wonder that my remark got blocked because of Mike Adam’s in-depth, utterly damning report. It opens (with additional emphases mine),

‘We have another major bombshell for you here, regarding the 2020 election. Despite the intense, malicious censorship of Big Tech, we’re really becoming known for in-depth analysis and research of current events, so thank you for your support as we continue to fight for the very survival of America, our constitutional republic.

‘This story begins with the little-known executive order signed into existence on September 12, 2018, by President Donald J. Trump. That order entitled, “Executive Order on Imposing Certain Sanctions in the Event of Foreign Interference in a United States Election.” is available at Whitehouse.gov

‘In that executive order, which almost no-one has covered since the day it was signed, President Trump declares a national emergency. That emergency is still in play to this day, and the 2020 election was conducted under this state of emergency, which is a crucial point to understand what’s coming next.

‘In the EO, the President also states that people and organizations located, in part, outside the United States are known to be able to, “interfere in or undermine public confidence in United States elections, including through the unauthorized accessing of election and campaign infrastructure or the covert distribution of propaganda and disinformation.”

‘If you’re starting to see how this ties in to CNN, the NY Times, the Washington Post and MSNBC, you’re not alone. All those organizations, as you’ll soon see, have been caught under this emergency declaration of “foreign interference” in U.S. elections, aided by complicit corporations on U.S. soil.

‘The EO further states that this foreign interference in U.S. elections, “constitutes an unusual and extraordinary threat to the national security and foreign policy of the United States.”

‘Why is this relevant to anything we’re seeing right now with the massive election fraud carried out by the Democrats and the deep state? Because Dominion Voting Systems is a Canadian company. And Scytl is run out of Spain.

‘Scytl, by the way, is connected to George Soros and the Democrats, and according to TGP (see below), “Bill Gates also own stock in Scytl.”

Dominion is Canadian, Scytl is from Spain; both represent “foreign interference” in US elections… with data routed through servers in Germany

Days after it was revealed how 2020 US Elections were rigged by Canadian Crown Agent Dominion Voting Systems through a so-called “glitch”, now GreatGameIndia has found involvement of another dubious foreign company in US Election meddling. The votes cast by Americans were counted by a bankrupted Spanish company Scytl in Spain. Like Dominion Voting Systems, Scytl has a long history of election fraud in various nations including injecting back-doors in its election software. The issue has prompted experts to question why the sensitive job of counting votes was outsourced to a foreign company? How could a bankrupted Spanish company count American votes in Spain? Due to such widespread fraud, the Chairman of the US Federal Election Commission Trey Trainor believes that the 2020 US Presidential Elections is illegitimate.

‘What people are missing in all this is that Trump’s 2018 executive order gives the DOJ the power to seize all assets of individuals and companies that were complicit in aiding or covering up this foreign interference in U.S. elections.

‘The National Emergency order specifically calls for seizure of all assets of entities that have, “directly or indirectly engaged in, sponsored, concealed, or otherwise been complicit in foreign interference in a United States election.”

‘That would, of course, have to include practically every CNN fake news anchor, every Big Tech CEO, every fake news journo-terrorist from NBC News, the NY Times and the Washington Post. They are all complicit in gas-lighting America and covering up the massive foreign election interference that just took place.

‘Trump’s EO further explains that asset seizures shall target people and entities which have:

‘In other words, the EO covers everyone who’s been corrupted or compromised by communist China. And that includes at least 80% of Democrat lawmakers, by our estimates, including Senators Feinstein and Schiff.’

‘But that’s not even the full extent of what’s demanded by this Executive Order. In Section 8, the order explains that the term “person” also means, “a partnership, association, trust, joint venture, corporation, group, subgroup, or other organization.”

‘In other words, any media organization that assisted in covering up or assisting foreign interference in a U.S. election is specifically targeted by this Executive Order.

‘Further in the definitions section, the EO explains:

…the term “election infrastructure” means information and communications technology and systems used by or on behalf of the Federal Government or a State or local government in managing the election process, including voter registration databases, voting machines, voting tabulation equipment, and equipment for the secure transmission of election results.

‘Finally, the EO describes what it means by the term “foreign interference.” It means: (emphasis added)

…any covert, fraudulent, deceptive, or unlawful actions or attempted actions of a foreign government, or of any person acting as an agent of or on behalf of a foreign government, undertaken with the purpose or effect of influencing, undermining confidence in, or altering the result or reported result of, the election, or undermining public confidence in election processes or institutions.

‘Note the important words of “altering the result or reported result of the election.” This is exactly what Big Tech and the lying fake news media have done to America. More that merely a crime, it’s treason… and it fell right into the national emergency trap that Trump publicly announced in 2018 which now means all these corporations and organizations can have their assets seized literally overnight.

‘In this video, Trump attorney Sidney Powell describes “staggering statistical evidence” and “staggering witness testimony” about the criminal election fraud that was carried out across America. She adds, “If you want to talk about foreign election interference, we certainly have it now.” Listen: – RB: AN EXCEPTIONALLY IMPORTANT INTERVIEW!

Click/tap image to play video (not in new screen)

Mike continues his extensive article under these sub-heads:

Then a most apposite section regarding Facebook’s censorship:

GOING DOWN: Big Tech, media giants, Democrat operatives and half the deep- state

‘It should be obvious to any informed person that everything Big Tech and the fake news media did to rig this election, then bury the Democrats’ massive vote fraud operations, was a covert, fraudulent deception and unlawful action… and it was all carried out on behalf of communist nations like China and globalist operations that are located outside the United States.

‘It’s not merely that the voting system companies whose hardware and software systems rigged the election were located in Canada and Spain; we’re also told that part of the CIA’s rigging of the election in real-time involved data being offshored to servers located in Germany and possibly Serbia. So there are at least three or four foreign countries involved in this election, and that doesn’t even include China and Venezuela, who both had other roles in running influence operations to rig the election outcome in favor of Biden. (Funding for Dominion was also provided, it is rumored, from wealthy socialists in Venezuela.)

‘Now, Team Trump is in the process of gathering irrefutable evidence of criminal collusion to carry out election interference, and the cover-up trails will lead directly to Big Tech (targeted censorship and collusion with China) and the fake news left-wing media (gaslighting propaganda campaign to cover up evidence of foreign collusion).

‘This means that in one fell swoop, President Donald J. Trump will be able to:

‘Never bet against the Donald.’

RECOUNTS no longer matter; the certification of votes is now irrelevant

‘Keep reading NaturalNews.com for more analysis in the days ahead… this is history in the making, hour by hour, day by day. You are a living witness to one of the most epic political genius “4D chess” moves in human history. Grab some popcorn and join the pro-Trump rallies in the mean time. Victory is coming.’

1 thought on “US Election’s NOT over: 11 – Facebook blocks info on fraud”