…last Thursday and got waylaid, then all this wouldn’t be in my head.:

IF – I’d not changed ‘tack’ in that day’s blogging, two ladies 25 miles away wouldn’t find something in common at the day’s end.
IF – on going to bed the previous night I hadn’t jotted words to start the ‘morrow’s blog, I wouldn’t have been so amazed the next day.
IF – upon waking I hadn’t realised that opening note needed new introductory material for the planned blog, and…
IF – a friend had not emailed me a couple of days ago, then I wouldn’t already have the background material to hand. However,
IF – his material had a brief summary too, then I’d have the necessary introduction.
IF – he’d not emailed that missing material as I was starting the day, then my originally planned blog would be very delayed.
IF – he and I had not kept in contact, then I wouldn’t have changed my planned post to one about a book.
IF – I’d not posted that unplanned blog, then a certain subscriber wouldn’t have told their family about the book.
IF – things had not happened and I’d not made certain choices last Thursday, then the book’s author, Neil Mackereth, wouldn’t have responded the next day with news of an amazing ‘coincidence’!! 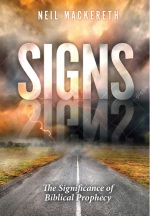 On closing down for the evening I let Neil know a reader had notified me they’d ordered a copy of ‘SIGNS’ – on that evening Neil’s wife attended a ladies meeting at a Winvin (Winchester Vineyard church) member’s house.

One lady told her that her mother up in the Midlands had just texted to ask if she was aware that a member of Winvin had written a book called ‘SIGNS’?  “No” was daughter’s reply –and that set the conversation going!  The mother is the one who’d read my post and ordered Neil’s book!

How often do we think or hear, “If only…then this wouldn’t have happened”? It’s usually in a negative vein regarding unfortunate circumstances.  But it happens positively too – and can be directed by the Lord.  (How often do we realise and appreciate this?)

A man’s heart plans his way, but the LORD directs his steps. (Proverbs 16:9 NKJV)

It’s well to consider and meditate upon the making of family and friends relationships, connections and events and thank the Lord for them all.

Last Thursday’s events are an excellent example of serendipity with good chains of choices/consequences (I had about 20 which could be drawn like a couple of decision trees in connection with the Queen’s Diamond Jubilee Bells.)  For those timings where the Lord is obviously involved I call them ‘God-incidence’. (For more on this concept click here.)

And as in the hymn penned by William Cowper, “God moves in a mysterious way, His wonders to perform…”.